This is an interesting time for me to start a running blog because I'm coming off of an annoying and painful muscle strain and had to cut my mileage way back. After going from a long run of 13 miles back to 3 - and a couple of weeks off - it's almost like starting over.

I had my strongest half marathon finish at the Salinas Valley half on August 6, 2011. My time was 2:10:39, not fast overall but the best I've done and a PR from 2:17:47 at my previous race. I was pumped and hardly even felt tired! The weekend after I ended up getting hurt while riding my bike.

I stopped riding the bike and kept swimming, then went back to running slowly. I made it back to 8 miles last weekend, and hope to go 10 fairly pain free later today. We'll see.

I should also back up to say I intended to complete a sprint tri this summer, which should have been today. I opted out because I haven't been back to the bike since that problematic day, and I still don't have full range of motion in my left knee without pain. It's a blow to the ego, but should be worth it to heal for my fall races.

The other part of my fresh start is new shoes - the best thing ever! Same shoes, same version, but new pair (Brooks Adrenaline GTS11.) I didn't even realize how beat up the others were until I compared them to the new pair. They were only 4 months old but took me through 3 half marathons and took a beating. 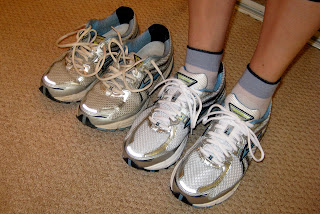 Until next time - just keep running!