Goal accomplished - I crossed the finish line and received my Tiffany necklace from a firefighter in a tuxedo! My time was 2:21:56, not bad considering the logistics and crowding situation. My last hilly SF race (The US Half, November 2010) was 2:24:41, so I'll consider it an improvement even though my newest PR is 2:10:39 (Salinas Valley Half, August 2011.) 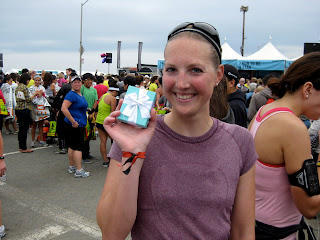 Race day dawned warm for SF, even a little humid, but overall very nice weather. I got ready and headed out to the start from my hotel in Union Square. Finding the start was easy - there were so many women and spectators milling around Union Square. The porta-potty lines were insane, and I don't think they had enough. Lucky for me my hotel was close so I didn't need it. I wore my new Lululemon Swiftly Tech Short Sleeve shirt and the Lululemon Run Inspire II Crop. 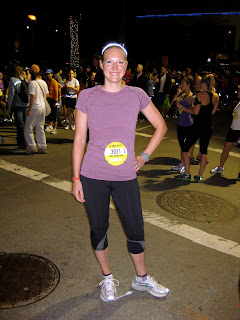 The first issue I had with this race is that Nike didn't assign start corrals, and people started wherever they wanted to. More on that later. I wanted to start in the 10-11 minute pace group, so I started looking for the color orange as directed in the expo packet. After asking around I finally saw a tiny orange sign for that group and headed toward it. I couldn't tell which direction was the start line. I never did see the other color signs to determine the start and end of the group, so I ended up starting with the 9-10 group. This was really fine since I expected to be right at about a 10 minute pace. I also looked around for a pace team, which Nike said would be wearing bright pink shirts, but I didn't see any in my start group. Again, not a big deal because I only use them for line up help.

After being pushed around quite a bit in the over-crowded start area, the race started. We moved slowly toward the start line and I crossed about 10 minutes after the gun (not bad for a big race.) As soon as I crossed the start line I began getting stuck behind walkers who had started in an early pace group. This made no sense; women were walking multiple people across, taking up big parts of the road at any given time. I dodged back and forth, back and forth figuring I'd eventually get out of the crowd. I never did. My first mile was at 9:48, right where I wanted to be, but shortly after I gave up the dodging game and just slowed down.

Race etiquette was very bad for this one, maybe because there were a lot of people new to this kind of event. People walked in groups all over the road and blocked others, they dropped clothing and trash in the middle of the roadway, and so many people were wearing headphones that it was impossible to say 'excuse me' to pass and for them to hear you. One person stopped in front of me and I ran into her back because I didn't expect it. People who wanted to run took to the sidewalks in an attempt to get around all of the walkers.

When we started up the hill into Fort Mason, almost everyone around me began walking. I ran up the hill and tried to follow the few others to make a path through the walkers, but it killed any momentum. I felt like I was bumping people and being rude, but I didn't mean to. I just wanted to run the hill!

Water stations were rough not very organized, so in many cases you had to go through a crowd of women walking slowly to grab fluids. At a couple of stations I had to wait on them to pour it. People seemed to basically stop moving forward when they took water, causing even more congestion. I prefer to be able to grab a cup as I run by without stopping, but that didn't work well in this race.

The course crowding got a little better once we hit the Marina, minus another hill situation going up to the level of the bridge in between those two sections of the course. I'd given up on running for a time, so I posed for a photographer and grabbed a Sports Basement gift card ($10 woo!) from their cheer station. I let myself do something I don't usually do - have FUN and not care about time.

The course went through the Presidio and then downhill along the Pacific Coast Highway; it was a beautiful vista. From there we went into Golden Gate Park, looped around and finished by Ocean Beach. At Mile 12 they handed out Ghiradelli milk chocolate truffle squares, a nice touch. (Admittedly, I expected more from the highly advertised 'Ghiradelli Chocolate Mile' such as more people and more hurrah, but I appreciated the chocolate none-the-less.)

The finish line amenities were super crowded but nice. Firefighters in tuxedos with orange bow ties handed out necklaces and posed for finisher photos. There were stretching areas, a massage tent, a shop, and few other tents for freebies. I enjoyed the Gatorade recovery shakes but didn't wait in line for anything else. Safeway gave us coupons for a free case of bottled water and reusable shopping bags made just for NWM. 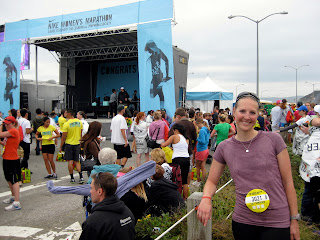 My final impression of the NWM Half is that logistics are really rough around the edges and I'd never run it for a time goal. That said, the course is gorgeous, the amenities and finish swag are fabulous, and it was overall very enjoyable! I'm hoping to register with a group of friends to make it a fun girls weekend in the future. 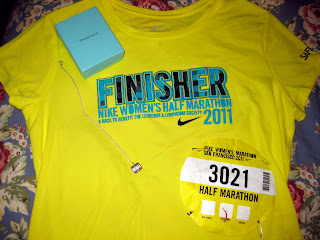