Our Halloween celebration at work was yesterday, and I gave it a running theme this year. This was mostly because I wanted a 'costume' that I already owned that would be easy to put together! My first idea was to go as Kara Goucher, my favorite woman marathon runner. I'd planned to wear a pink Nike tank, black shorts, black arm warmers, a medal, and a race bib with Goucher written on it.

Telling my husband my idea, I commented that if only Kara was still pregnant I could be a prego Kara Goucher for Halloween. And then it dawned on me - I could just wear my Chicago marathon gear and be Amber Miller. Hopefully this isn't tasteless, I was going for funny.

For anyone who didn't hear about this, Amber Miller is the woman who ran the Chicago Marathon this year at 39 weeks pregnant. She went into labor at the end of the race and gave birth only hours later. I'm astounded that she ran the marathon pregnant, let alone at 39 weeks. I admit I find it a little crazy - why put yourself through that? (From this comment, you can assume that I didn't love the marathon. I've only done it one time and I had a hard time in the 80 degree heat, perhaps I'll give it another go since Malibu didn't work out.)

The costume ended up cute, and some people caught on and found it really funny. Some people were confused but thought a pregnant marathon runner was funny anyhow. When I told them it really happened, their jaws dropped. See my costume below - Chicago race bib, medal, and shirt (Kevin's shirt - mine was too small to stuff the stomach.) If nothing else I loved wearing comfy running clothes to work! 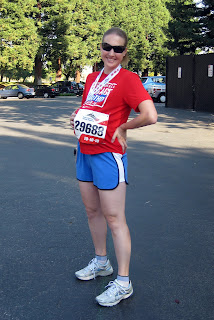 The party at work was great, although not as many people dressed up as I hoped. In my old office EVERYONE dressed up and there was a ton of enthusiasm. Here, some people dressed up but most just seemed amused at those who did. Even so, we had a fun time at the party with food, drinks, a costume contest and a fantastic live band!