Back in the Saddle

This past summer when I was new to the bike, I started riding with a great group of people and coaches from Integrate Performance Fitness. The coaches started from the beginning with me - clipping, gear shifting, downhill and uphill techniques - everything. I learned so much! During this time was when the hamstring tendentious and bursitis situation became bad, so I took a break and had not been on the bike since August.

But last night, I finally got back in the (bike) saddle and realized how much I'd missed it. I wasn't sure I liked biking much and didn't know if I'd miss it, but I totally did. Getting back on the bike felt weird, like the seat was too high and painful, but I know I'll get over that once again. When I stopped for a break in August I'd finally been feeling pretty comfy on the bike.

I went to the IPF indoor class (it's too dark now for evening riding outside) and we did a metabolic circuit. It's amazing to me how intense riding on the trainer indoors can be. Al took us through quite a few sprint/recovery rounds and finished with off-the-bike lower body strength exercises. I hadn't known about the extra strength work so that was a nice bonus. Yes, I enjoyed strength after biking because I like to feel like I had my butt kicked. 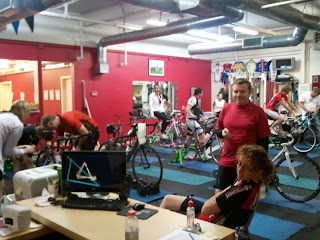 As for my injury, I felt sore after getting off the bike but stretched and rolled it out a ton when I got home. Today it's slightly sore, but I think I'll be able to do it. Starting back on the indoor trainer is perfect because I can work at my own pace without getting dropped during an outdoor ride.

Most of all, I missed the group of people at IPF. It was fantastic to see them and to feel like a part of a group again. I'll fly the red, black and white happily in my IPF kit. 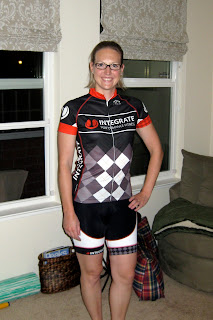 I missed my triathlon this year due to needing the break, but I have high triathlon hopes for the spring!