This was a very low mileage week because we spent the week skiing instead of doing a long run, especially considering that I cross train a lot and am not a high weekly mileage person anyway. It should work out fine - I started training early in order to have a few off weeks during ski season.

Monday, January 23
Planned: 3 mile run
Completed: 3 mile run + strength
I felt great even though I ran in the dark after work. It was a short run so I added strength and toning exercises for legs and core.

Wednesday, January 25
Planned: 6 mile run
Completed: 6 mile run + Vinyasa Yoga
The run was decent, although my legs were feeling Tuesday's biking workout. My pace was slower than last week's 6 miler by 40 seconds per mile. Yoga was an add on to relax and stretch and it did the trick. I'm loving Yoga now.

Saturday, January 28
Planned: Skiing
Completed: Skiing
We went to Heavenly for the weekend and skied all day Saturday. I took an annoying fall when a kid stopped in front of me at a narrow trail merger and I had to cut of the way - really hard hit to my left shoulder. No fun, that's going to be sore for a few days! The snow was very hard and fast, and icy on Saturday. We still got some good skiing in. 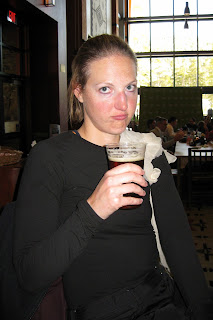 Sad because my shoulder hurt a lot - but the ice pack and beer made up for it!