This was another week with skiing, meaning weird workout schedule. But it's so much fun! The main issue with my workouts this week is a debate about biking. I like going to my indoor biking class, but I'm not planning to go to the outdoor sessions in March. The main reason is that my knee still bothers me when I ride, and the second reason is that I want to focus on the marathon. I'm signed up for a duathlon in March but I'm feeling a little skeptical because I haven't ridden outside (and practiced clipping!) since August. We'll see.

Sunday, February 5
Rest after that 12 miler. And a Super Bowl party.

Wednesday, February 8
Planned: 7 mile run
Completed: 7 mile run
For the first time in a while my run felt amazing! I was very happy at the end and satisfied with my pace of 10:08/mile. My target for the first spring half, Oakland, is 10:15-10:20.

Saturday, February 11
Planned: Lots of skiing
Completed: Even more skiing than planned!
Fun weekend at Heavenly with a visiting friend and my hubby. Saturday conditions were a bit rough and crowded, but we got out to the slopes early on Sunday and had a fantastic day skiing in the California sun. We finished the day with lunch and beer at Steins. I'm going to feel all of the skiing tomorrow when I wake up for work, that's for sure! 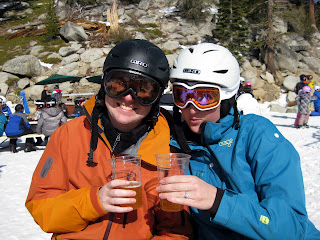