In shocking news, this half is now my PR at 2:10:07! I really didn't go into the race expecting to PR, especially with the mass start making the first mile or so pretty slow. There is also a decent narrow-ish trail section that slowed everything down. But I did it, I made up the time somewhere and crossed the finish with a PR by 32 seconds. (Previous PR Salinas Valley Half in August 2011, 2:10:39.) I'm so pumped!

My husband ran this one as well, and we both enjoyed the race a lot. It was laid back, inexpensive ($40 entry fee) and fairly well-organized considering the size of the race. The one really rough spot was the start, which had no markers for starting with people near your pace. The porta potty lines were in the road not that far behind the start, and the 10K started 15 minutes later, so those lines were a bit in the way too.

There is no race expo so we picked up our bibs at Sports Basement in Sunnyvale during the week. They had a 10% off shopping party and pizza with the packet pick up - a nice bonus. Even better, I managed to find my size in the Brooks Adrenaline 11 on clearance and picked them up. Win.

Runners picked up T-shirts after the finish, although sadly they were all men's cut so the arms are a little long. Not a big deal though, I like the dolphin on the back and I'll wear it for something I'm sure. The medals are nice, my first rectangle-shaped one. 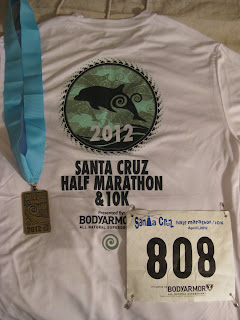 As in Oakland, I felt good throughout the whole race and didn't tire out. I'm sure I owe this to training for the marathon and running past the half marathon distance in training.

Based on feeling good in Oakland last weekend, I tried to push just a little more than I did there starting around mile 9. I made sure I felt like I was working hard, as if I were running a 5K, from that point on. We followed the twisty road back along the ocean and then started a short downhill to the beach. I passed mile 13 before I expected to, realized I could PR if I ran even harder, and began my sprint toward the finish. When I hit the sand (the race literally finishes on the beach) I stumbled a little but caught myself and kept on going.

Even at mile 13 I wasn't expecting to PR, and by my watch I was at 13 miles on the dot when I finished. I've never, ever had the course finish before my watch before - it's always at least 0.2 miles over. I'm hoping my GPS was off and that the course was correct...but who knows. If I'd had to go the extra 0.1 that I expected I wouldn't have been on track for a PR. Hence my surprise at the finish!

After crossing the finish line I found my hubby, who finished at 1:53:09 and was waiting patiently. We enjoyed some Body Armour sports drink while walking along the pier and sat on a bench to watch the race for a while. It was a great end to the run.

On the way home, we stopped for food and a Pizookie at BJ's Restaurant and Brewery. Oh how I love the cookies & cream Pizookie! And of course, we had beer too. Beer always follows a long run! 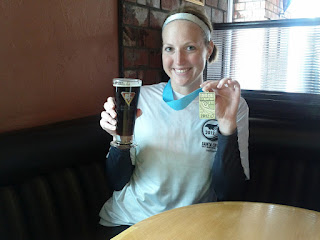 The course: The course is fairly easy but has a couple of hills. The worst part of the course is the space crunch when you enter the trail section. Going from paved road to paved trail squeezes everyone into a small area and it's hard to pass. Later, the course goes from paved trail to dirt trail and becomes even narrower at spots - especially due to the huge mud puddles this weekend - and it's easy to get stuck behind someone. That said, the dirt path along the ocean is beautiful! Scenery is my favorite, and this race had lots of it. I was strangely reminded of the Cliffs of Moher in Ireland during that section; I thought I was crazy until my hubby said the same thing! There weren't many spectators at all, but the scenery made up for it in my eyes.

The support: Race support was ok. There were plenty of course marshalls to keep runners on the right path and streets were sufficiently closed. Water stations were quite good, especially for a small race, and I didn't have to wait on water at all. They handed out Hammer gel at a strange spot, somewhere around mile 4, which seems much too early. I didn't grab any because I don't use Hammer Gel and didn't want to carry extra anyway.

The finish line refreshments included bagels with cream cheese, fruit, granola bars, water, and Body Armour sports drink. It wasn't a huge spread but seemed sufficient for the race (at least when we finished.) As usual, I skipped solid food and went for the water/sports drink until we got to BJ's for lunch.

General organization: It was easy to drive to Santa Cruz and to park when we arrived around 7:15 am for the 8 am race start. We paid $5 to park in a lot a little farther away and walked over to the boardwalk area. As mentioned earlier, the start line was not well-organized and resulted in a mass start of people going many paces. The porta potty lines intersected the start corral and caused extra congestion. This start situation didn't create the impossible bottleneck I anticipated, but the first half mile or so definitely involved dodging a lot of people. The finish area wasn't too crowded and there were no lines for food and drink when I arrived.

With that, I'm calling this race report finished. Check out Santa Cruz sometime if you want a laid back, beachy half marathon.