Ok, I haven't done a training week recap in a few weeks so I need to pick it back up. I stopped because I had some weird weeks, almost like a training 'break.' That said, official training break definitely did not equal rest! After 7 days of skiing and back to back half marathons, I'm feeling good and worked-out. This week was still a little odd, but I should get back onto a normal schedule this week. Without further ado, here was the past week.

Monday, April 2
Rest Day 1
I try to give myself 2 rest days after a half marathon race, and that tends to work for me. Sometimes it's hard to skip my normal runs, but I know it's good.

Wednesday, April 4
Planned: 3 miles
Completed: 8 miles
Oops. Yes that says planned 3 and done 8. My first run was mid-day (my lunch run if you will) and I took a turn on the Bay Trail I hadn't taken before. I ended up in a strange place, very close to Nasa, and had to climb a gate back to where I wanted to be. So...that run was 4.5 miles by the time I returned to the office. Later, the hubby wanted to run so I went out with him too. All in all it was 8 miles, but I felt really good and had a blast!

Thursday, April 5
Planned: 3 miles
Completd: None
After the previous day's mistakes and extra run, I let myself off the hook. It was good because I needed to go to a work going away party anyway (and had planned to skip it to run.) Glad I went.

Saturday, April 7
Planned: 17 mile long run
Completed: 17 mile long run
Yay I made it through! I get nervous for the really long ones, this run being no exception. I headed out with my husband on the Guadalupe River Trail in San Jose, which is quite good for long runs. The only down side is that it's so flat; the only little hills you get are the underpasses for roads. We ran to Alviso, where there is a nice park area for restrooms and water refills, then came back to downtown San Jose. Our turnaround also happens to be the location where we volunteered at the water stop for the NorCal Marathon last September.

Overall, I felt good on the run and feel like my mental stability got me through it. I kept thinking about a motivational poster I pinned on Pinterest - Don't let your mind give out before your legs do. Around mile 14 I was hitting the wall, thinking I was too hot and needed to stop. We took a walk break for about 2 minutes and started running again, and it was a second wind. Thank goodness! It's funny how sometimes I start to walk and realize that running feels way better.

After the run? I stretched, used the stick, cleaned up and ate lots of chicken at Smoke Eaters in San Jose. It was fantastic.

Now for the comic relief - my awesome running crop tan lines from yesterday. They work well with my dress for Easter, don't you think? 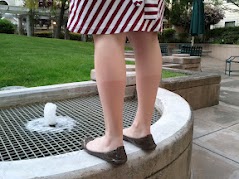