The Earthquakes Challenge, named after the San Jose soccer team, was a fun race for Memorial Day weekend. I don't run 10Ks often and decided it would be good to test myself in a shorter, hopefully speedier, race. The outcome? I have a new 10K PR and broke one hour for the first time at 56:39. I'm so pumped about this one, it went better than I could have imagined! 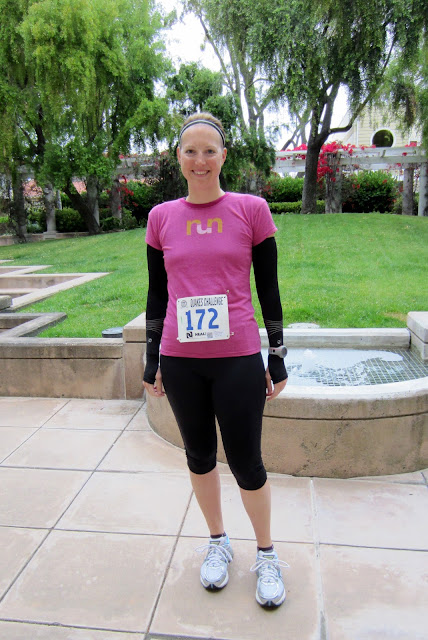 A before photo. I'm wearing the Oiselle tee that I WON from a contest last week. Yay!

The morning dawned chilly, around high 50s as we headed over to the start line. Kevin and I ran a slow warm up to the start, which was 2.25 miles from our condo. The warm up felt good and I could tell my muscles were happy. We arrived with 20 minutes to spare, enough time to hit the porta potties and to stretch. We lined up in the start corral for the 10K with a pretty small crowd, a few hundred people. I'm terrible at guessing how many people are in a crowd so I'll leave it at that.

The gun sounded at 8 am and off we went. The 5K then lined up behind us, and they started their race at 8:15. Lots of people started off fast and passed me, but I told myself out loud to run my pace, run my race. Don't get swept up in the crowd and regret it later. My target pace was 9:30 per mile, which would put me just under an hour total time.

The course was super flat and easy, and the miles went by pretty quickly. The first three miles were just under 9:30, and I was feeling good. I focused on cadence to keep my speed up, checking my pace on Garmin every so often as a reminder.

Coming into miles 4 and 5 I was feeling awesome and ready to drop the pace. I focused on being a little out of my comfort zone, enough to know I was pushing myself. I'm still thrilled with how good I felt at these paces yesterday, especially considering how slow I've been feeling on 15+ mile runs.

Around the beginning of mile 4, the Police were controlling traffic and letting cars through when there was a break in runners. I saw them start to let cars go as I was rounding the turnaround, and I yelled to the cops that I wasn't stopping because I was going to break an hour for the first time. Lucky for me they stopped the traffic again. Not my best moment, but I so didn't want traffic to alter my time. Thanks to those cops for helping me out!

At mile 4 I also started passing people who had gone out too fast and were now walking. I started targeting one person at a time and passing them, then moving onto another person. As I caught up with a guy right before mile 5, he asked if he could run with me because he needed motivation and I had a good pace. I said of course, and we egged each other on until the end. It was a nice mile-long partnership! It turns out it was his first 10K and longest distance so far.

We hit the finish chute and picked it up and he came in a few seconds behind me. We gave each other a big high five and congrats and went on our merry ways. I enjoyed it, and I feel like I helped to motivate someone in a time of need! 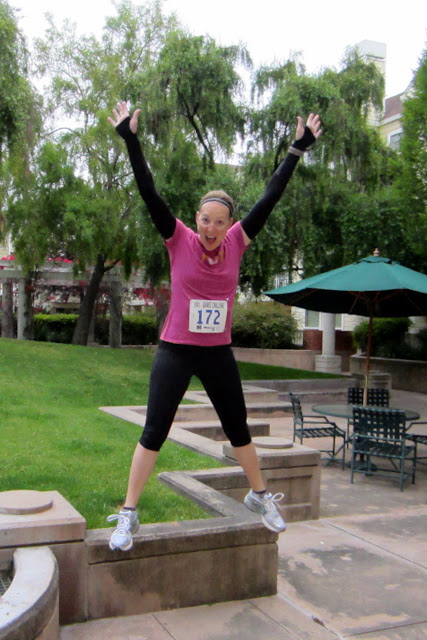 I jumped for joy for that PR!

The course. The course is super flat. The only grade you even feel is a little downhill where De La Cruz veers left to Coleman. I suppose you go up somewhere to get to that point, but you can't really feel it. The 10K course repeated most of the course, making a left turn and another loop, and then continued straight to the finish. Loop courses often bother me because they can be boring, but I was so focused on time for this one that I really didn't think about it. I also think it was marked a little short, because both Kevin and I came out with 6.13 on the Garmin. It would have been a PR either way, but I still hate when that happens. Overall it was a good course to test your time and to shoot for a PR.

The support. Volunteer and finish line support was good. This was the first year for the event, so you never know how it'll turn out. They had plenty of people at the water stations, plenty of water stations along the course, and lots of food at the finish line area. I can't say if they had sports drink at the water stations because I didn't take anything. The course marshalls did a great job except for one spot where the 5K went straight to the finish and the 10K turned left. There was no sign for the 10K turn and they were doing it vocally. I don't run with music so it was clear to me, but some people with headphones had a hard time here and my husband saw one go the wrong way and turn around to come back.

The finish line area had bagels with cream cheese, fruit, granola bars, Pop Chips, energy drink, water, Pirates Booty, and coffee. I enjoyed a bagel and coffee for my second breakfast, yum. I never eat bagels and especially cream cheese, so it was a real treat! I took the Pop Chips, granola bars, and Pirates Booty home to enjoy later. At the finish there was also a medical tent and massage tent, as well as a place to check your results.

General organization. There was no expo for this race, so we picked up our packets and t-shirts at Sports Basement in Sunnyvale on Friday. They offered packet pick up there on Saturday too, or at the race start on Sunday. The Sports Basement pick up had pizza, cookies, and drinks, which is always a nice bonus. We received a cotton t-shirt AND a ticket to a San Jose Earthquakes soccer game to use this season. I don't mind that the shirts are cotton because I'll use it to sleep in or to wear around the house; so often the tech shirts don't fit that well and I end up not wearing them to run anyway. 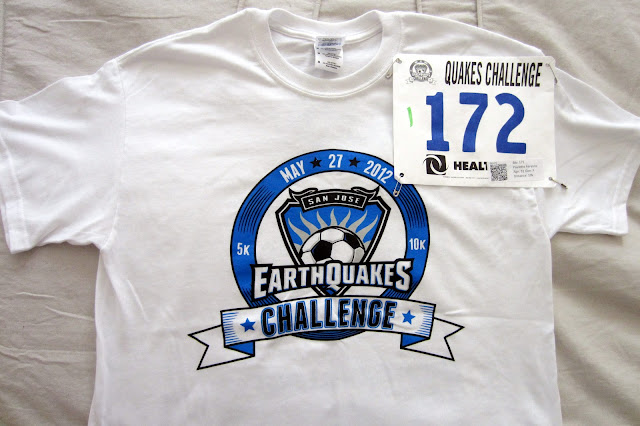 The race was small, so there were no snafus at the start or crowds throughout the race. It was easy to get to the start, parking was free and right at the start if you used it, and porta potty lines were short. Race information was provided in an email to participants the week before and it went off smoothly from my perspective. It can be really refreshing to run a small race.

That's it for this race report, happy running!