I had a great week! I did almost all of the mileage I wanted to, one 4 mile run short because of traveling to Boston on Thursday. My Core Chaos class on Wednesday was fantastic and we did a lot of it outdoors in beautiful weather. My long run for the week was in Boston with new scenery, and it was one of my best recent runs for sure. I'm riding the runner's high this week.

Sunday, May 6
Planned: Rest
Completed: 30 minutes Elliptical
After having a cold last week and a congested & coughing Saturday run cut short at 3 miles, I felt the need to move. I threw in an easy elliptical workout and felt much, much better.

Monday, May 7
Planned: 4 miles
Completed: 4 miles
I ran with a friend. It was super hot outside, almost 90 degrees, and my cold is still giving me some trouble. Overall I felt better than expected and did pretty well in the heat.

Tuesday, May 8
Planned: 6 miles
Completed: 6 miles
This run was better than Monday; it was slightly cooler outside and I had less coughing and congestion. I kept the first 3 miles under a 10 minute/mile pace, and slowed down the last 3. Except for one coughing situation near the end it went great!

Wednesday, May 9
Planned: Core Chaos class
Completed: Core Chaos class
This is the new class I started attending last week at Integrate Performance Fitness (IPF) in Mountain View. This is also the studio behind the biking sessions I did last summer, and I love the group. I'm so glad I finally committed to the strength class. It's called Core Chaos, but we did a lot work for legs and arms too. This class involved lots of lunges and black band squats outside, plus some jumping and running. Super fun!

Thursday, May 10
Rest and a long day of flying to Boston to visit a friend. Yay for a long weekend!

Friday, May 11
Planned: 8 miles
Completed: 9 miles
My friend showed me a fun running path near their apartment and I set off for an 8 mile run. My long run this week is shorter, and next week I'll do the 18 mile run. I mentioned that I'd be running long this week in a post, but I forgot about travel. It's fine, I have plenty of time to get my two long runs in before the Seattle RnR Marathon and another easier weekend after Big Sur and being sick isn't a bad thing. I had a blast running in the park in Boston, going around Jamaica Pond a few times. I tried to make each mile around the pond a little faster and I did, then I took a 2 mile cool down (should have been 1 mile cool down, hence the extra mile. Miscalculation in a new place.) I felt fantastic after this run!

Saturday, May 12
Rest and fun times along the coast of Maine. We headed up to Ogunquit, ME, to enjoy the coastal views. We hung out at a coffee shop with ocean views, walked the beautiful trail for a while, and then stopped in Portsmouth, NH, for dinner. This means I went to TWO new states in one day, pretty awesome! It's amazing to me how close the states in New England are and how beautiful everything is. Tomorrow, we are heading out for the Freedom Train running tour first thing in the morning - should be awesome! 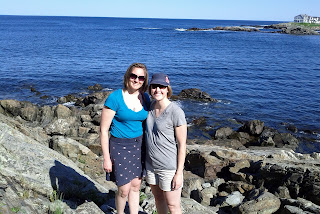 Ann and I along the coastal path in Ogunquit, ME 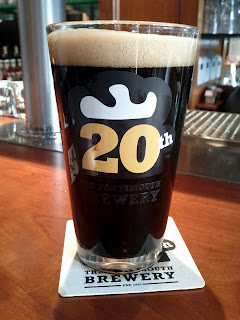