Where does one even start to describe such a fun and long event? This is definitely not your normal, run of the mill race. It's an event full of running, making new friends, cheering, and lots of fun. I'm realizing how long one post about Ragnar would be, so I'll be breaking my Ragnar recap into three posts. The first two sections, day 1 and 2 of general race report and logistics. The third, random photos. Stay tuned for additional segments in the next couple of days, and start here with the report, part one!

I was in van 1, and our start line was at Marina Green in San Francisco. The big orange Ragnar arch, tents, and of course a ton of vans made it easy to spot the start area when driving nearby. We met up with our SF teammates and then went through check in. It was pretty easy, we started under the 'Start here' banner and followed the directions to each section of check in. We picked up bibs and race info, checked in our safety gear, listened to the safety briefing, got our orange flags for runner support, and picked up goodie bags with t-shirts. Two of the race shirt sizes were too small, but it was no problem to exchange them for a better size at the finish. 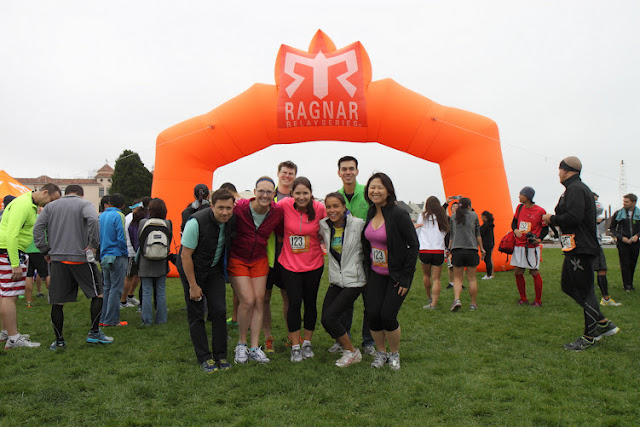 Van 1 at the start line.

After check-in, our first runner, Kim, got ready to go for our 10:30 am start time. The start times are staggered based on estimated finish time, and it seemed like 30 or so teams began at each start time. Not too long later it was our turn and Kim was off to run the first leg across the Golden Gate Bridge. 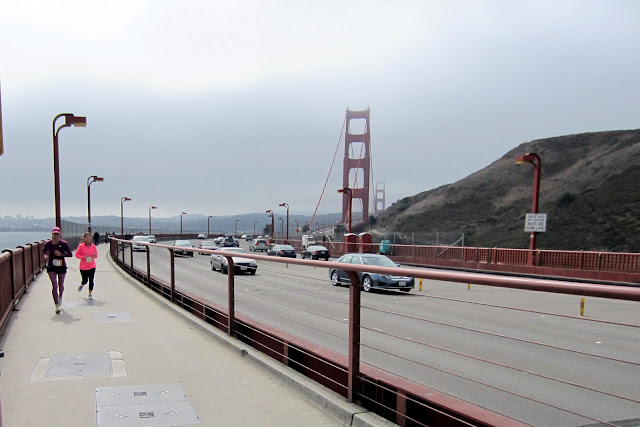 Kim, in pink, finishing the bridge. 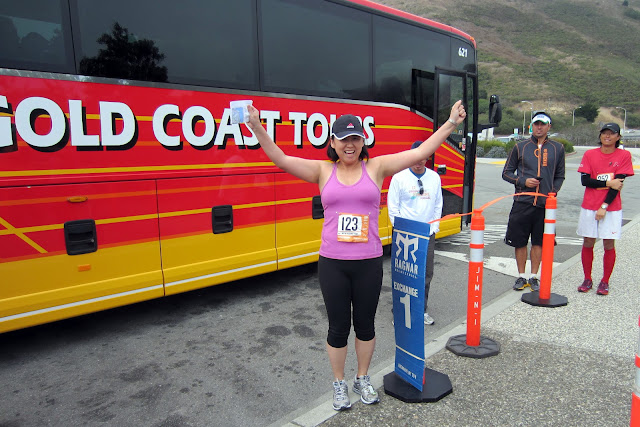 Helen ready to roll at exchange 1!

From this point, everything felt like it went by so fast. Kim passed to Helen, our second runner, and then I was next. Helen's leg was short and driving took a bit, so I wasn't quite ready to go when it was time. I found myself running to the exchange to get there before Helen! But I made it, got the slap bracelet, and took off on my run. My first leg felt pretty terrible in all honesty - really tight and sore calves. I finally warmed up after about 3 miles and did better on my later splits of the 5.9 mile leg. It was so exciting to see the team cheering for me at the exchange, and I finished strong to pass the bracelet onto Julie. 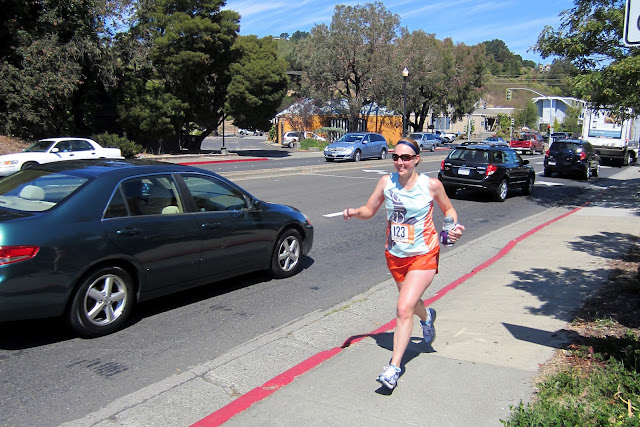 I checked off my leg on the van, and we piled back in to head to the next exchange. What did we find there? A huge - really huge - hill that runner 5 was going to have to tackle. One down, two to go. 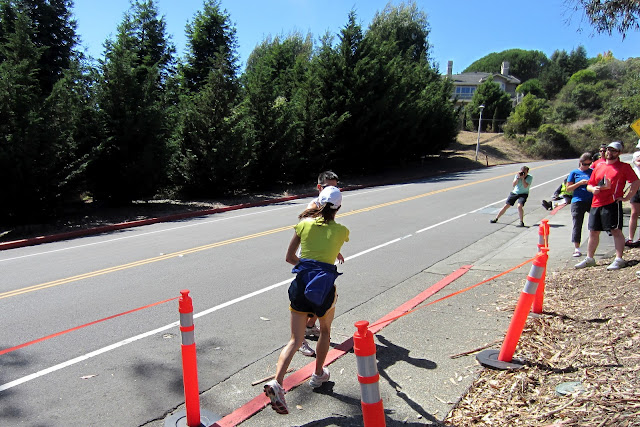 Julie handing off to Eddie, who went up the hill.

Eddie totally killed that leg even with the hill, and the next thing I knew Kevin was off to finish the first van 1 section. At this time of day the temperatures were getting very hot, so as happy as we were for the break we were feeling bad for van 2 coming on in the heat of the day. 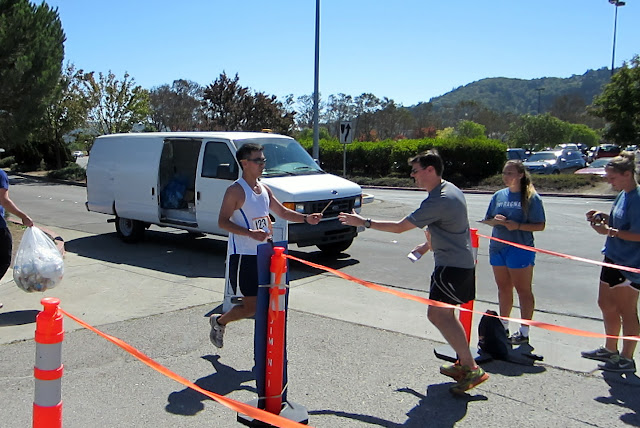 We headed to exchange 6, where were were finally united with our van 2 teammates. If there was one disappointing thing about Ragnar, it was how little time we got to spend with van 2. I wanted to see more of them! Kevin passed the baton to Charise and she headed off on her run, and we took a quick photo op with both vans before they had to head out. 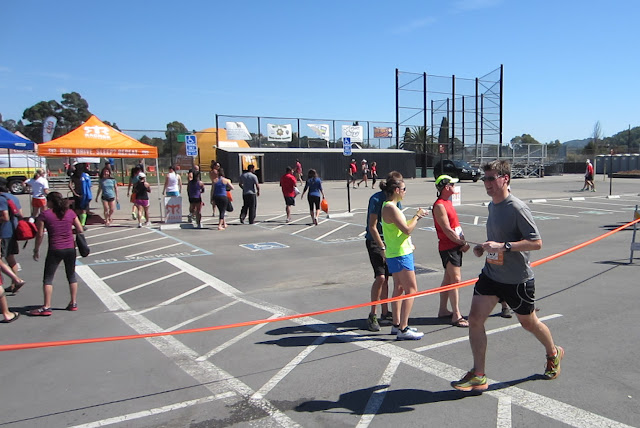 Kevin coming in to the exchange. 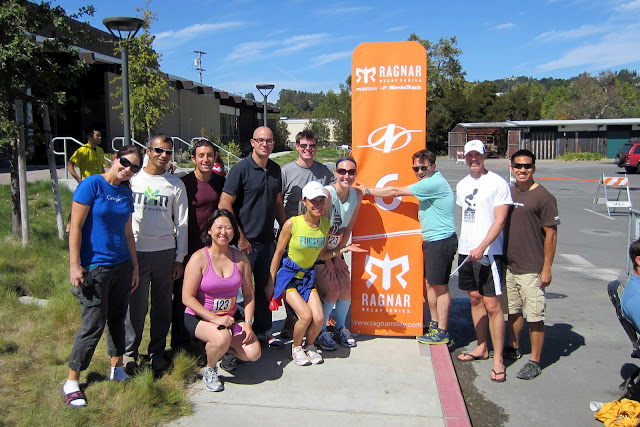 Ok we have a few hours, what do we do? We headed to Helen's amazing house along the course for a quick shower and then to Marin Brewing Company for lunch. Yum! We definitely made the most of our break time. We hit some bad traffic on the way to exchange 12 in Petaluma, but we luckily made it with plenty of time. 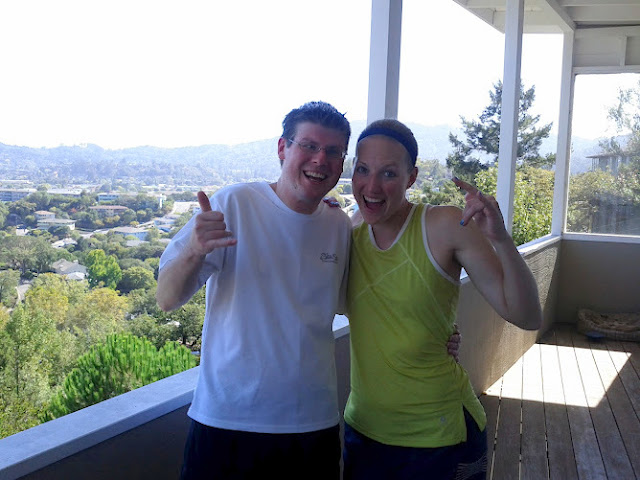 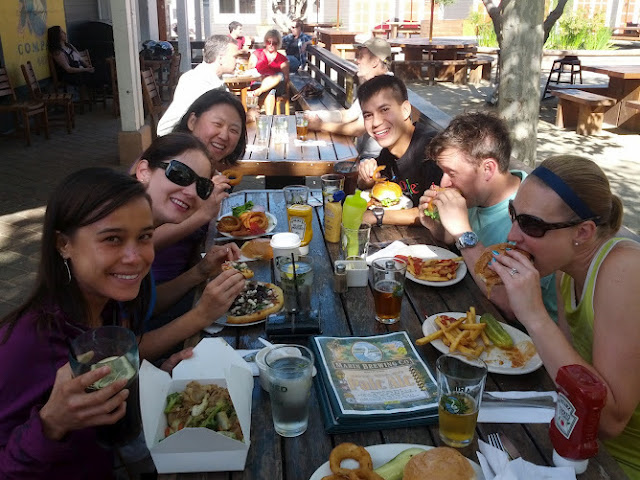 Mmmmmm burgers. And other good food. 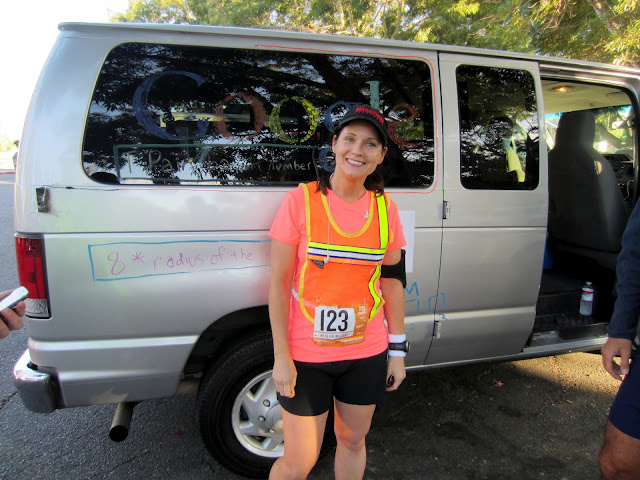 Kim ready to kick off van 1 again, decked out in night gear. 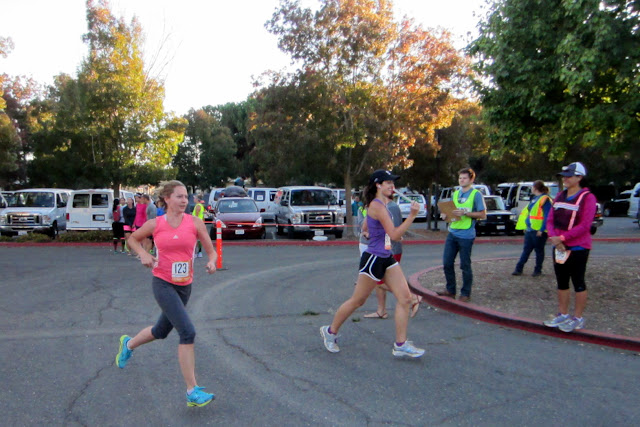 Van 2's last runner, Amy, came in strong and passed the bracelet back to Kim. Van 1, here we go for our night legs! I was nervous about running in the dark, but it was liberating when it came time to run. My exchange was awkward because the Ragnar staff person didn't call out our number and I didn't know Helen was there until she was RIGHT there, but I was prepared to run so no problem.

My second leg wasn't much better than the first with regards to calf pain, but I wore my compression socks and it helped me warm up a little faster. I swear this leg felt like a slow uphill the whole time, and again I started slow but finished great. This 6.7 miler ended up being my favorite run of the event! 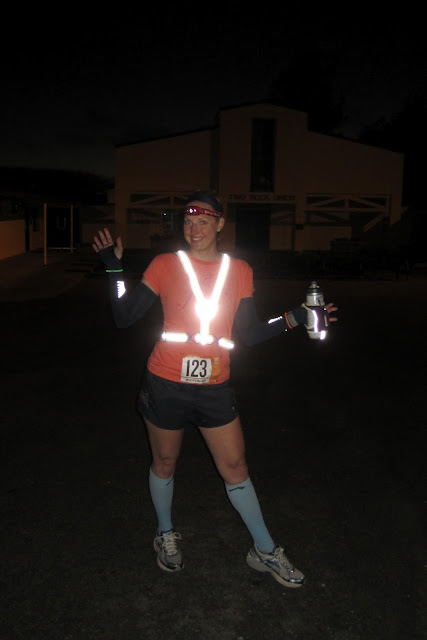 We moved quickly from exchange to exchange, welcoming Julie and Brandon (our driver, also night pacer) back from a super speedy 8 mile night leg. The next I knew, Eddie was back, Kevin was out running, and we were back at the mega-exchange to meet van 2. 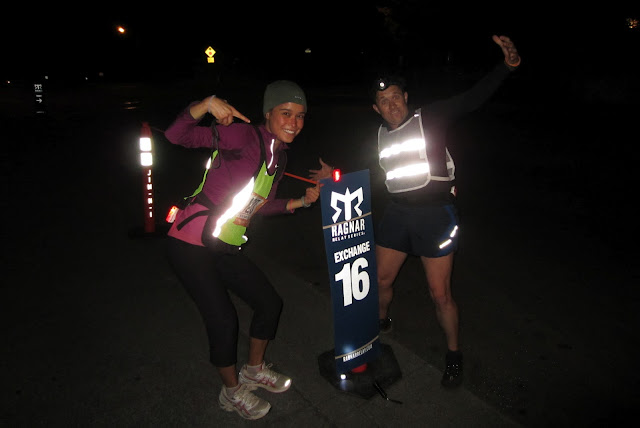 We had a slight timing mishap with exchange 18 and Kevin ended up waiting 5 or so minutes for runner 7 to be ready, but that was the only time we really had issues. As a side note, we did van support for our runners with long legs at night, and it was really nice to check in on them and to make sure all was well. We took them water/Gatorade and cheered them on. Even better? We had distinctive lights on our vans so it was easy to determine which one was ours along the side of the road. 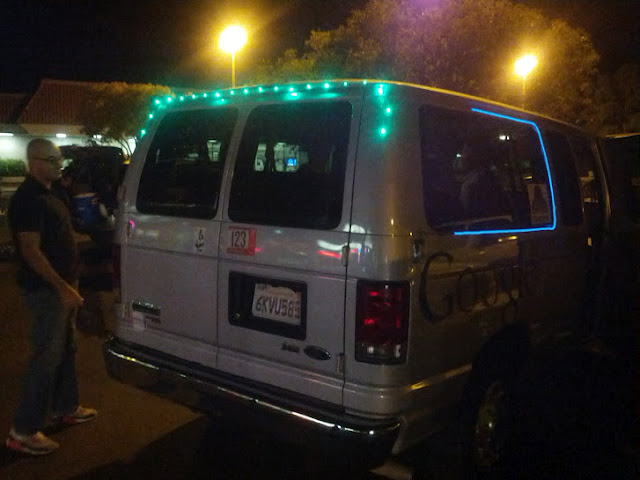 Lights for the win.

From here we headed to the next major exchange 24 and took advantage of the $1 showers and indoor sleeping at the HS gym. Nothing like a gym full of sleeping bags end to end! It looked like it would be hard to even find space to sleep, but luckily people were in and out depending on start times so it worked out.

This ends day one of the Ragnar recap. Stay tuned for day two...