I had a very active week, which was a little surprising after being sick last week. That said, I wouldn't say I was at 100% and probably still am not because I have a habit of doing too much too fast. I have no planned workouts marked because I didn't want a plan after being sick. I listened to my body and did what felt right instead. Although my mileage wasn't as high as I'd have liked, I had quality workouts and feel really good about the week.

Monday, September 24
Completed: 4.1 miles
This workout involved a lot of run/walk because I was feeling very congested and coughing a lot. Nothing good to say about this one except that I made it through.

Wednesday, September 26
Completed: Core Class
This was a tough class, especially considering I'd missed the previous couple of weeks due to Ragnar prep and being sick. We did the normal type of workout: lunges, lots of pushups, plank, mountain climbers, v-ups, and more. I felt great during the workout and was significantly sore for about 2 days after.

Thursday, September 27
Completed: 4 miles
My birthday run! Kevin and I went running after work before we went to Original Gravity for my birthday. Super fun, took it easy and enjoyed the twilight. The only annoying part - we ran the Alameda so we had a lot of stoplights to deal with. I wrote a post about my birthday too.

Friday, September 28
Completed: 6.1 mile trail run
Alisyn and I met in the morning to run the trails in Picchetti Open Space Preserve. I love this place, although I had forgotten how steep some of those hills are! Both up and down are tough. It was a gorgeous morning for running, chilly and foggy. We saw lots of animals out too - 5-6 deer, a bunny, and a peacock! I've never seen a peacock in the wild before, so that was pretty cool. 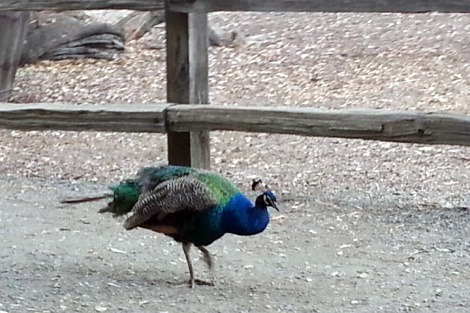 Such great color in the brown-ish backdrop. (Photo from Alisyn)

Saturday, September 29
Completed: 7.9 miles total (Oyster Race Urban Adventure)
I ran a 2 mile warm up along the water in SF, and then we did the running segments of the Oyster Race for the Integrate Performance Fitness relay teams. It was a fun social time, and we had 5 IPF teams total. I'll be writing a more detailed blog post on this adventure, so stay tuned!