I've had two races now where I significantly slowed down and walked due to a nasty side cramp on my right side. Not the kind that eases up when I stretch, breathe better, or slow down. Both times it started early, mile 1 or 2, and held on for the entire time no matter what I tried to do. And it really sucked.

Even worse? After the races it didn't go away for a while. The first instance during the Seattle RnR Marathon hurt noticeably for about a week after, and then it dulled out but remained for 2-3 months before completely easing up. Six weeks after Seattle, I mentioned in passing to my husband that I wish my side would stop hurting. He sort of freaked out because he didn't know it never went away (if I hide it, I don't have to worry about it, right?)

Naturally I'd been I'd Googling the heck out of the internet in an attempt to figure out the problem and who else has side cramps that never leave, but I didn't come up with anything useful. Anything I found about running related cramps said they went away with breathing, slowing down, and walking with hands on head, and they never stayed after running.  I really just assumed it was muscle hurting from being cramped for the whole marathon.

Kevin insisted I see the doctor, who was also rather concerned when I told her how long I'd had it. She did an exam and didn't think it was appendix due to the severity and location, but she said we needed to do tests. I went for two CT scans, many blood tests, and then an MRI because they couldn't tell what they were seeing on the CT scans. There was a lot of worrying in the middle because the doctor thought it could be a major liver issue or tumor, but after the MRI the verdict was nothing. The cramp must be from muscle healing, everything else is ok. I'll have a follow up MRI in December to make sure, but they don't expect an issue.

Fast forward to Sunday, the San Jose RnR Half. I had a good first mile and got out of the start crowd at my target pace, but then I was hit with the side cramp. It felt just like it did in Seattle, maybe even worse at times, and again I couldn't get it to leave. Remembering Seattle wasn't helping my stress level any, especially with this being my goal half marathon for the fall. I finished the race doubled over and again the side hurt for the rest of that day and the next few. It came back hard when I ran on Tuesday. I assumed that would happen all week and potentially for the next 2-3 months like before, but at this moment it seems to be basically gone and didn't bother me on my last two runs. 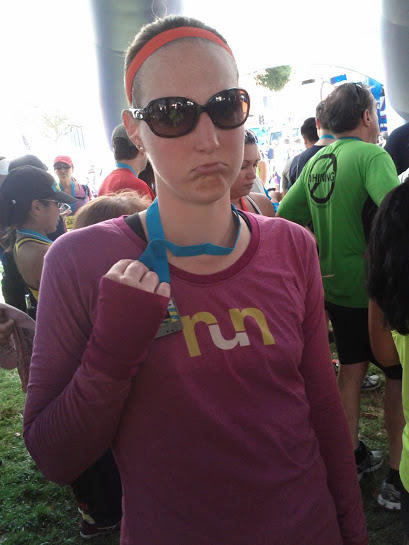 My post-race sad side cramp face.

I'm sharing this story because I haven't found any info on these lingering side cramps, and I'm hoping I can either help (commiserate with) someone else or find someone who has been through it. I don't know what initially caused the cramp, especially considering I was focused on eating well, hydration, and doing everything right to prep for my races. I have a few more halfs and a full coming up, and right now I'm worried about this continuing. If you have thoughts, let me know because I'm all ears - leave it in the comments!