Training Around the Triple

A few weeks ago my October race schedule went a little nuts when I added Nike Women's to my original list of San Jose RnR and Detroit - but I just couldn't resist the chance to sign up. This meant I'd booked myself for three half marathon weekends in a row. I realized what I was doing, and I don't particularly consider this to be crazy because I'm going to run that far (or longer) anyway. Why not do the races with friends, right?

At this point I can honestly say I'm really glad I added NWM. I had a blast, enjoyed seeing and cheering for friends, and had the chance to redeem myself after a tough run in San Jose. This weekend I'll be running the half in Detroit, an event I enjoyed back in 2009 and am looking forward to running again. I can't say how I'll attack this race yet; I never intended all of them to be at 'race' pace and so far only one has been. I'll make the game day call based on how I feel that morning. Either way, two friends will be running their very first half marathon in Detroit and I'm pumped for them! 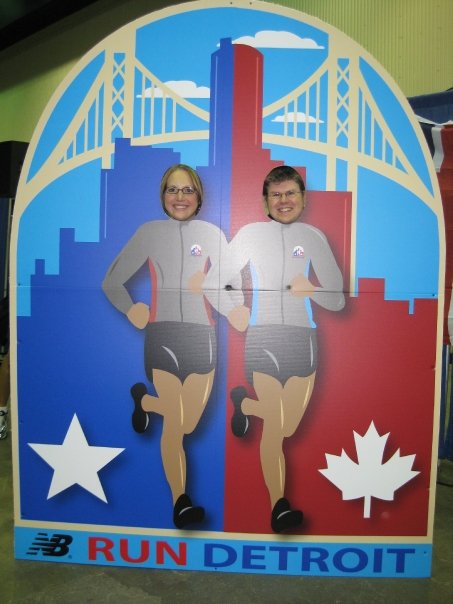 A little throwback to the Detroit 2009 Expo.

The most interesting part of doing three half marathons in a row is deciding how to approach the weeks in between, especially considering that I don't want to drop weekly mileage with CIM in December. Run normal mileage? Cross train only? Run lower mileage? All of these things went through my mind and/or were suggested to me by others. Here's what actually happened.

For San Jose. I ran normal mileage the week before, and I used Body Pump for my strength session that week. Running wasn't an issue, but going to Body Pump the first time pretty much wrecked me and made my legs super sore. I should know better than to try a new workout before my goal race, but I guess we live and learn. I thought I was tougher than I am perhaps. Believe me, I felt like crap for San Jose in many ways and I learned my lesson.

For NWM. As I didn't push myself in San Jose, I wasn't sore and didn't take any extra rest days after that one. I ran normal mileage and did a lower key strength workout. Race morning didn't feel any different than a long run day of a normal training week. I felt good, so I was able to go for it.

For Detroit. I ended up rather sore from NWM, especially the hill muscles and my right achilles. Monday was a rest day, Tuesday was a strength day, and the first run day was Wednesday (today). I'll run the next couple of days as planned and have slightly lower mileage than normal for the week, but not by much.

Overall, I treated these races as if I were scheduling long runs and didn't make any changes to taper. This strategy seems to have worked well so far and we'll see how I feel in Detroit for number three. After this weekend I'll be able to focus on increasing my long run distances for CIM, which is starting to freak me out a little because I'm behind my normal marathon training plan.

Warning - I'll be throwing one more race report your way in the near future!