This past Saturday I ventured to the Marin Headlands to check out the trails. I've wanted to run there for a long time, and I signed up for the Envirosport trail race to help me figure out the path to take. I love trail events for teaching me about new locations. I didn't treat this as a race at all, it was just a fun time on the trails, but I'm recapping the event itself.

There are a few event companies that have races in the Headlands, but I chose this one because the dates worked out. The downfall is that this company charges a bit more for their events than the others, but it also had a nice late 9 am start time which made driving up in the morning much more pleasant. I left San Jose around 7 am and easily made it to the start area by 8:15 am. As I drove in, I was a little bummed to see the heavy fog and rain; the views on this course would be stellar on a clear day. That said, the heavy fog was kind of fun and made the trails feel even more peaceful. The rain left us wet and muddy, but even that can be fun on a trail run.

After arriving, I found Rebekah from Oiselle team and had a few minutes to say hello. She flew in from Colorado to run the marathon. I love meeting other Oiselle team ladies! 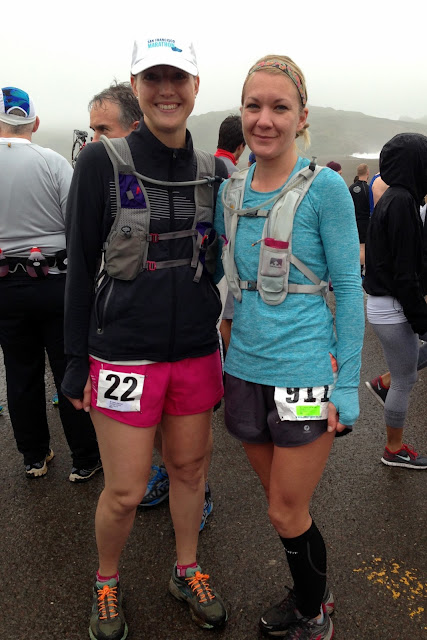 Me and Rebekah at the start area.

The marathon started first, and about 10 minutes later the half marathoners were off. I ran the jacket in the photo back to the car at the last minute and I'm so glad I did. We hit climb number one right from the start line, so the first 1.5 miles or so were uphill, and I heated up quickly. This wasn't a joke hill either, it was steep and part involved many stairs. I was taking it as a training run, so I didn't push pace uphill and did my walk/run thing to stay in aerobic zone. This was followed by some glorious downhill into the first aid station. I'm really glad I have trail shoes because the extra grip was a necessity to run that in the rain; so many people had no idea it was a trail race and showed up in their clean road shoes. Yikes.

The next big climb, almost 2 miles up, started just after that aid station. Around this time I met a new friend named Amanda and we had fun chatting. We stayed together and finished at the same time! It's so fun to have a buddy on the trails. Once again the uphill was followed by some fun downhill, and then the course was flat and rolling for the remainder. I have to say it's much easier to run the flat and rolling parts in the slippery mud. Perhaps the most interesting was the finish - the last half mile or so was across the beach in SAND. Talk about adding a last minute challenge. I finished at 2:28:23, which is totally fine with me on a tough trail run. I wish I had more photos for this recap, but I didn't carry my phone because of the rain.

The Course. I wasn't thrilled with the course markings for a couple of reasons; the half/7 mile split was very unclear and I almost went the wrong way (they didn't mark distances with different colors,) and they only marked turns as opposed to the whole route. At one point I started worrying that I went the wrong way because I could only see one other person and hadn't seen orange flag markers in a long time. Both Inside Trails and Coastal mark courses way better than this and they make the turns super clear. Also, I'm not convinced the course distances were correct. I know my Garmin is always off on trail so I didn't think much of that, but when I looked at the website the elevation chart only goes up to 12 miles. I emailed the company to ask and received a roundabout answer regarding elevations not being perfect and courses not being certified. They said it should be close to the advertised difference. So it was 13.1? Or is 12 considered close? No idea.

Race Goodies. The other trail companies take photos and provide them to runners, whereas Envirosport charges for photos. Also, Envirosport gave out cotton tees as opposed to tech tees even though the fees were higher. I don't personally mind cotton tees because they are comfy for lounging, but it's strange that you get less when it costs more. Perhaps I'm just spoiled by the other trail race event planners. 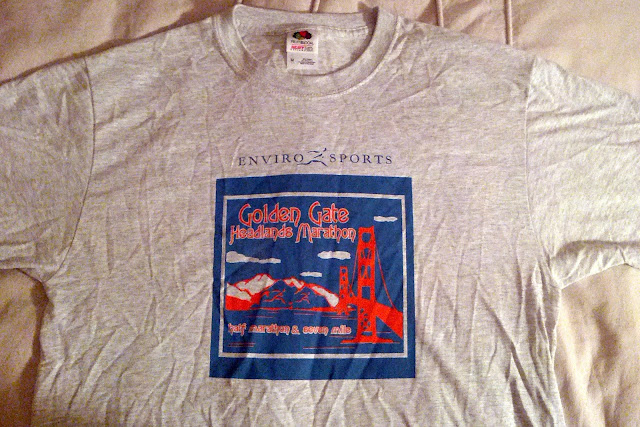 The Finish Line. The race didn't have timing chips, but there was someone at the finish to write down bib numbers and times. It's not unusual for trail races to be manually timed anyway. After finishing, we picked up the shirts and they had snacks and water/gatorade for the runners. It wasn't a huge set up but was definitely sufficient. I think less people were hanging out because of the rain.

Overall, I had a good time and the course is gorgeous, but not my favorite race company after this experience.