This past Thursday, I ran the Esprit de She 5K 'Happy Hour' event in Palo Alto after work. I've never done a race after work before and it was really fun. The event was only about 3 miles from my office, so I headed out around 5 pm for the 6:30 start and had plenty of time to warm up. My friend Catherine came out to run it too. 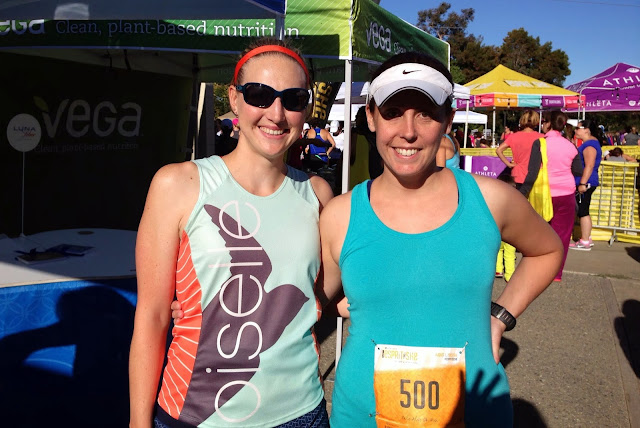 Chillin' with Catherine before the race.

I arrived and grabbed my bib and shirt quickly, they were very efficient with the packed pick up. The gear check was also super easy, so I handed off my spike bag and headed out on the course to warm up. During that 2 miles, I discovered the side wind was pretty crazy and my bib became a huge distraction so I folded it small and moved it to my shorts. Glad I figured that out before I was gunning for the PR pace.

The trail is super skinny for a race, but the organizers did a fantastic job with spacing us out. They had the first corral be 'people who wanted to go for the PR' so we could get through the first part more easily. The next corral didn't start for 3 minutes, and I think they had 2 or 3 more after we started, each spaced 3 minutes apart. It was still a bit congested getting onto the trail but not nearly as bad as it could have been. After we settled into our paces, it was spaced out and no problem.

The course started on a paved section of the trail and then hit the dirt/gravel part about half a mile in. It was an out and back course, so we ran out by the Palo Alto airport, turned around, and came back to the start. I love running out on the Bay Trail even if it is dirt/gravel for most of it. I don't run this section often, but I do run on the trail from Mountain View all the time.

I didn't wear the Garmin and don't have splits on this one, but I know I was pushing and felt like I gave all I could. I paced myself with another lady for the majority of the race - my 'rabbit' if you will - and then kicked it to pass her at the end. I really felt great finishing this one, and ended up with a final time of 24:50 for a new 5K PR. 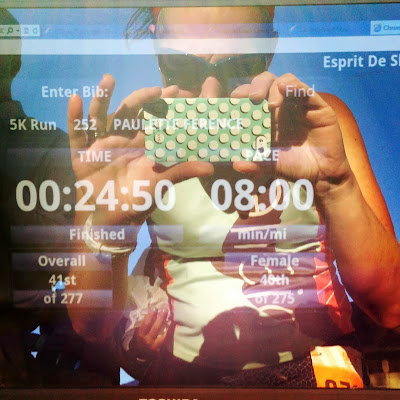 At the finish, they had water, champagne, and some strange food. They were serving yogurt and salad. I'm sorry, but I don't think I can stomach salad after racing hard. Perhaps because it is an all women focused race they served salad? Oh well, I had fun anyway and went home to eat my own food.

Another highlight of the evening was meeting fellow blogger, Kim! We chatted for a bit before the race and then again at the finish, cheering for other ladies as they crossed the line. Kim is a health coach and also an ambassador for the Esprit de She race series. I really should have grabbed a photo with her too, but alas I didn't. 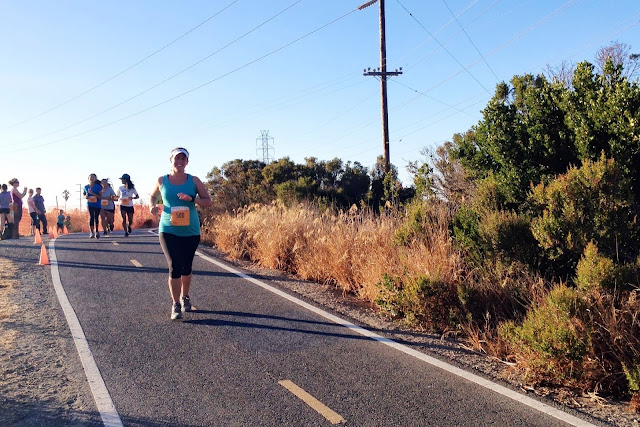 Catherine finishing with a big smile!

Last but not least, I thought the swag for the race was super cute. The gave out cotton tank tops and yellow tote bags, plus a few goodies like lotion and food inside. 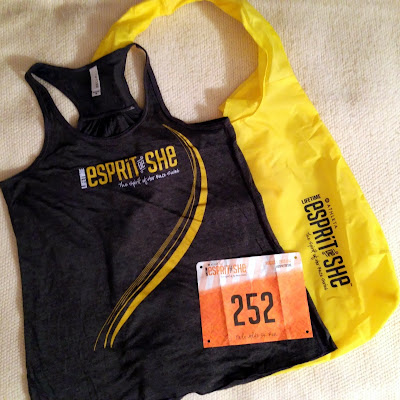 I liked this little event, especially that it was near work in the evening for a fun change of pace. I'd do it again and recommend it.