This weekend brought two fantastic days on the trails plus my longest trail run to date, 16.6 miles. I couldn't bear the thought of a long run on our usual South Bay routes this weekend and I was itching for dirt, so I convinced Kevin to make the drive out to Big Basin State Park for our long run. Big Basin is part home to the Skyline to Sea Trail, a trail that starts in Saratoga Gap and ends at the ocean by Waddell Beach. I've had my eye on running this trail for quite some time because I've heard such great reviews.

Of course, the trail is very long and we didn't run the whole length of the trail Saturday. I'm saving that for - drumroll please - my 50K debut at the Coastal Trail Runs Big Basin 50K on June 8, 2014. Multiple race companies run a 50K event on the Skyline to Sea Trail at different times of the year, but June feels like perfect timing with no ski season training plus time to add in a few longer trail events early in the year as prep. Even better? I can train on the course and sleep in my own bed! Kevin has generously agreed to chauffeur me to the start and to pick me up at the finish so I can avoid the long morning bus ride.

For our Saturday run, we started near Park Headquarters so we could get oriented to the park and get the paper trail map. I prefer to get the nice paper maps instead of trying to print one online because they are so much easier to read. Then I have them for planning future runs; I have stashed quite a few park maps on our bookshelf by now. Big Basin is a huge park and has tons of trails in addition to Skyline to the Sea. I can't wait to explore more and more of them.

The highlights of the run were Redwood trees along the way and the mountain rock faces near the top of one peak. You climb into the Santa Cruz mountains and then descend into the basin, so the terrain and scenery change a lot during the course of the run. It's gorgeous. 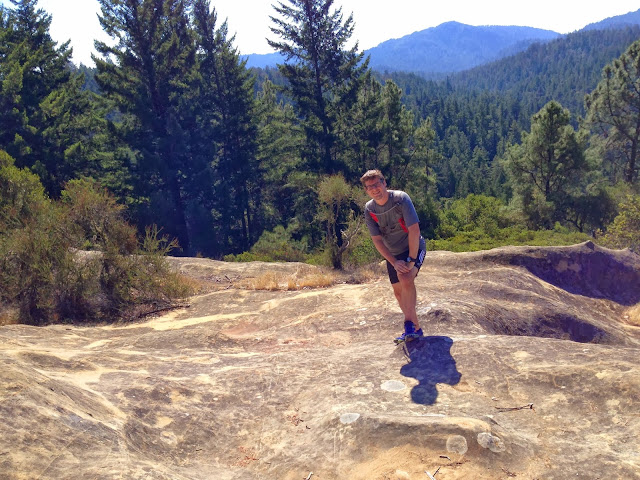 Rock near the top after climbing out of Big Basin. 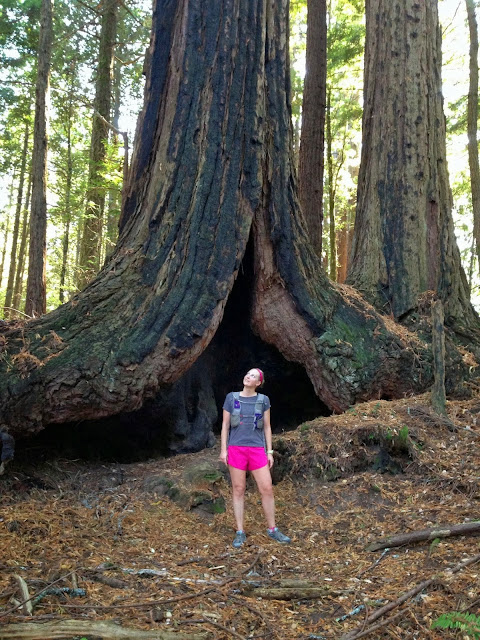 And how could I forget the last highlight (lowlight?) - my first trail running fall. I'm fine, just a few scratches and a sore arm and hip. For no reason I recall, I took a nice dive going downhill while crossing the rock section on the way back. I landed in a bunch of pine needles so it was pretty soft, although the abundant little pine needle cuts on the right side of my body actually hurt. The falling feeling shook me up more than I would have expected, and I was timid on the downhills back to the car.

Today I went out for a little over 5 miles with Sophia, who is visiting the Bay Area from Truckee, for some easy trail miles. Considering how worried I was about my sore hip and long run fatigue, I felt great! We went to Steven's Creek County Park, another new park for me, and a park I'll be returning to for more trail running. It has a mix of single track, fire road, a reservoir, and nice views.

This weekend is a wrap, back to work tomorrow through Wednesday and then I'm off to Phoenix for Ragnar Trail Relay at McDowell Mountain. Can't wait!
Labels: 50K Motivation trail running