We spent this past weekend in Huntington Beach for the Surf City Half Marathon. This is a race I've wanted to check out since moving to California, and I was lucky to get a free entry from the race company for helping out with The Town's Half giveaway and race report last summer. Kevin came along and paid for an entry so we could both enjoy the event.

Huntington Beach was really nice; this was our first time there and Kevin's farthest point south so far. We stayed near the expo and start line at the Shorebreak Hotel and loved it. Comfortable and relaxing. After a late night drive on Friday, we slept in and then went for a little shakeout run along the beach on Saturday. The scenery on the beach path was gorgeous and the sun was awesome. It's almost always sunny in the Bay Area too, but I swear this was brighter. 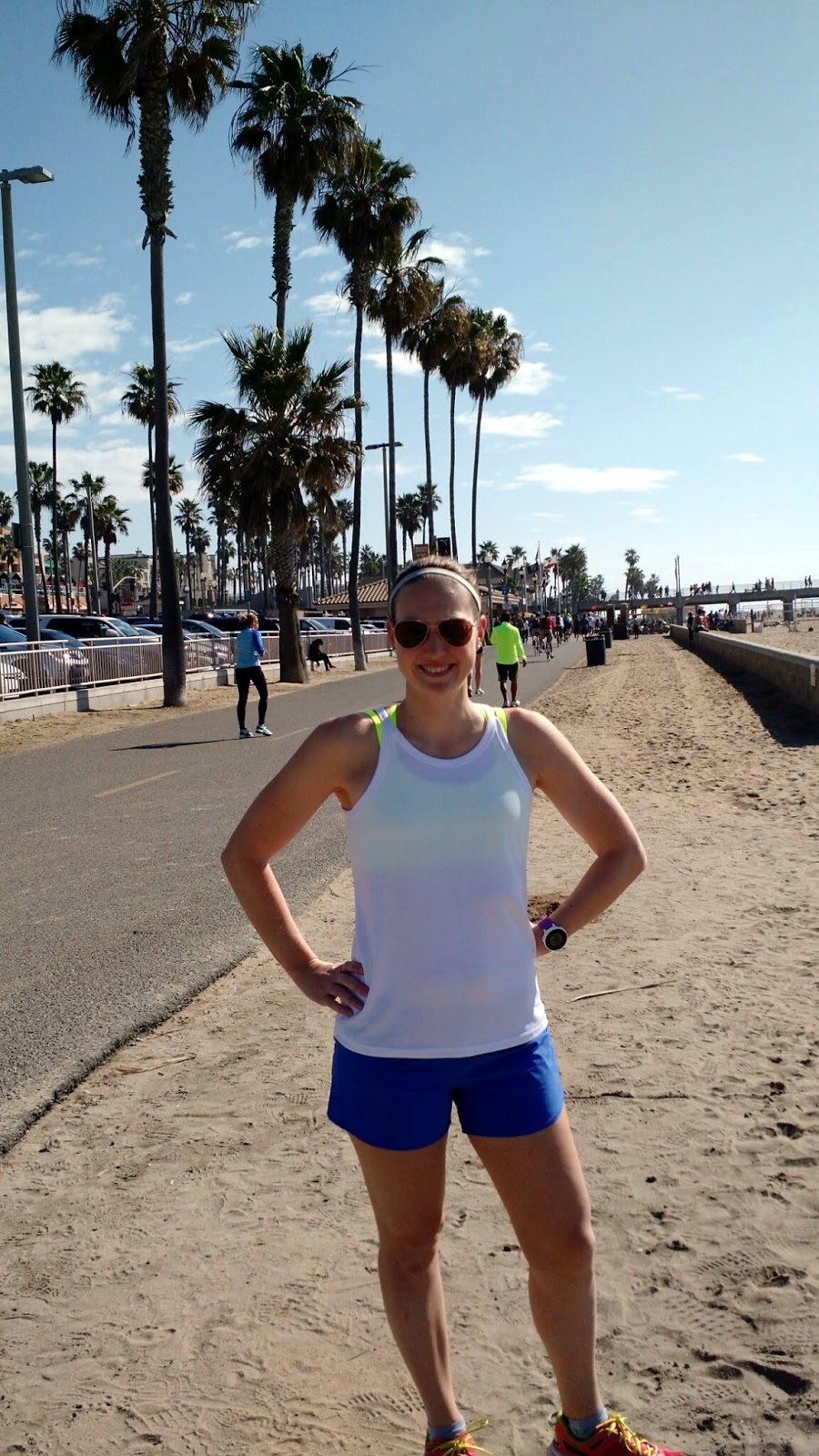 After the run we cleaned up and visited the expo, which was in a tent along the beach. It was a pretty large expo and had the usual types of vendors, but we felt like there were many less free samples. Picking up our bibs and shirts was very quick and there was no line when we arrived around 2 pm. The most eventful part of the expo was taking a photo on the surf board backdrop. 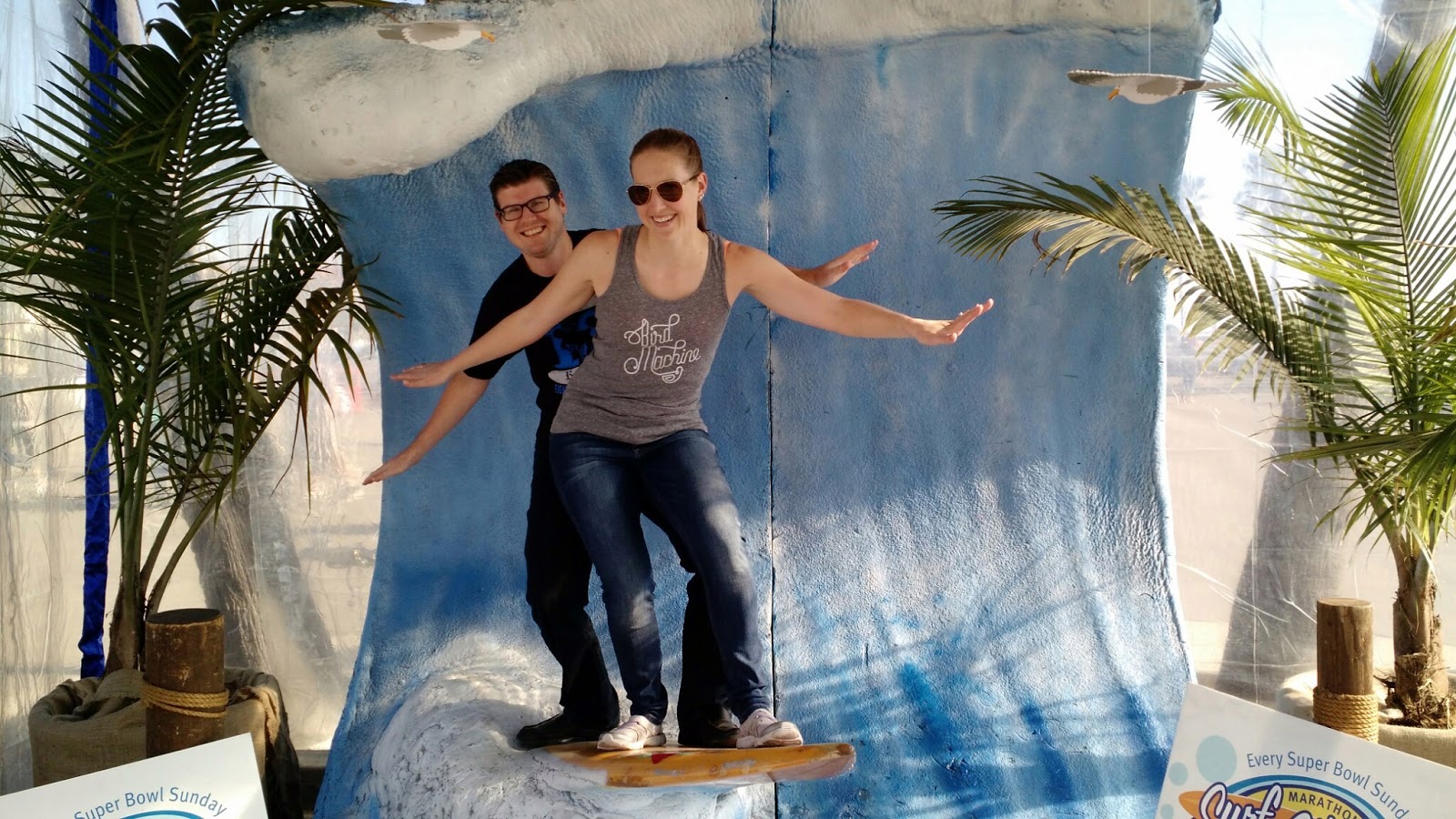 The rest of Saturday was spent hanging out at The Bruery tasting room, eating pizza, and resting in the hotel. We picked up our Reserve Society membership order at The Bruery and tried a few beers by sharing a tasting flight. I really wish we could have had more, but that whole running thing was getting in the way...

On Sunday, the half marathon started at 7:45 am (later than the marathon.) It was pretty warm in the morning and only got hotter; I really think this race would benefit from an earlier start time. It wasn't HOT compared to other races I've done, but I prefer nothing above 65 degrees and it was mid-70s with extra heat from the bright sun. Somehow there were people running in long sleeves and/or pants which blows my mind.

The wave start was very smooth and they put about 2 minutes between each one. You found your wave based on your bib number. It wasn't patrolled, but people seemed to do well at self-seeding and I didn't have any crowd problems running at the start. One thing I found strange were the runners with strollers who started from the front corrals because they were causing a bit of congestion and tripping people. Then again, I'm always getting passed by people with strollers and I'm sure they were in the right wave.

I have been feeling drained lately and had decided a couple of days before that this would be a training run pace, and I stuck to that goal. There was definitely no targeted training or tapering for this one and my mileage has been increasing over the past few weeks. The race started with a long straightaway down the PCH for a couple of miles. We turned right and looped through a little residential neighborhood with a little uphill and downhill to enjoy. We then headed back to the PCH and turned right to keep going out farther.

About 3 miles or so later we turned around for the out and back section. From there, we stayed on the PCH along the water until the finish line. Talk about a long, straight route! I find things like this pretty brutal because there are no turns or hills to anticipate. On the bright side, we had the ocean view to our right. The marathon made yet another turnaround onto the beach path to do a second out and back section before finishing.

I was using it for a training run at long run pace, so I don't have any exciting tales to tell about pushing myself or feeling like I wanted to fall apart. I finished in 2:16:35; my time is much slower than usual partly due to the training pace and partly due to one portapotty stop and one rock-in-my-shoe stop that together totaled 3-4 minutes. 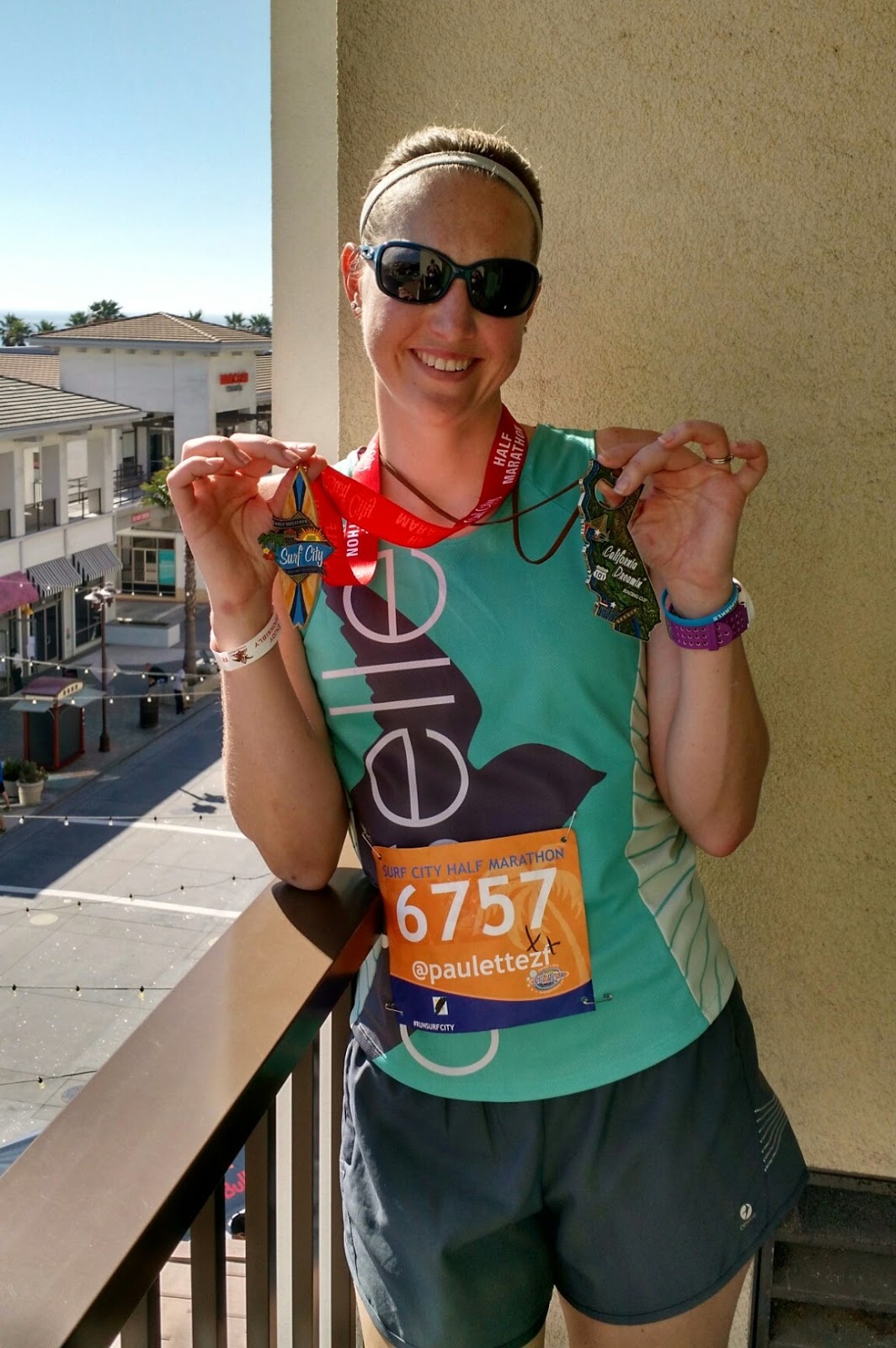 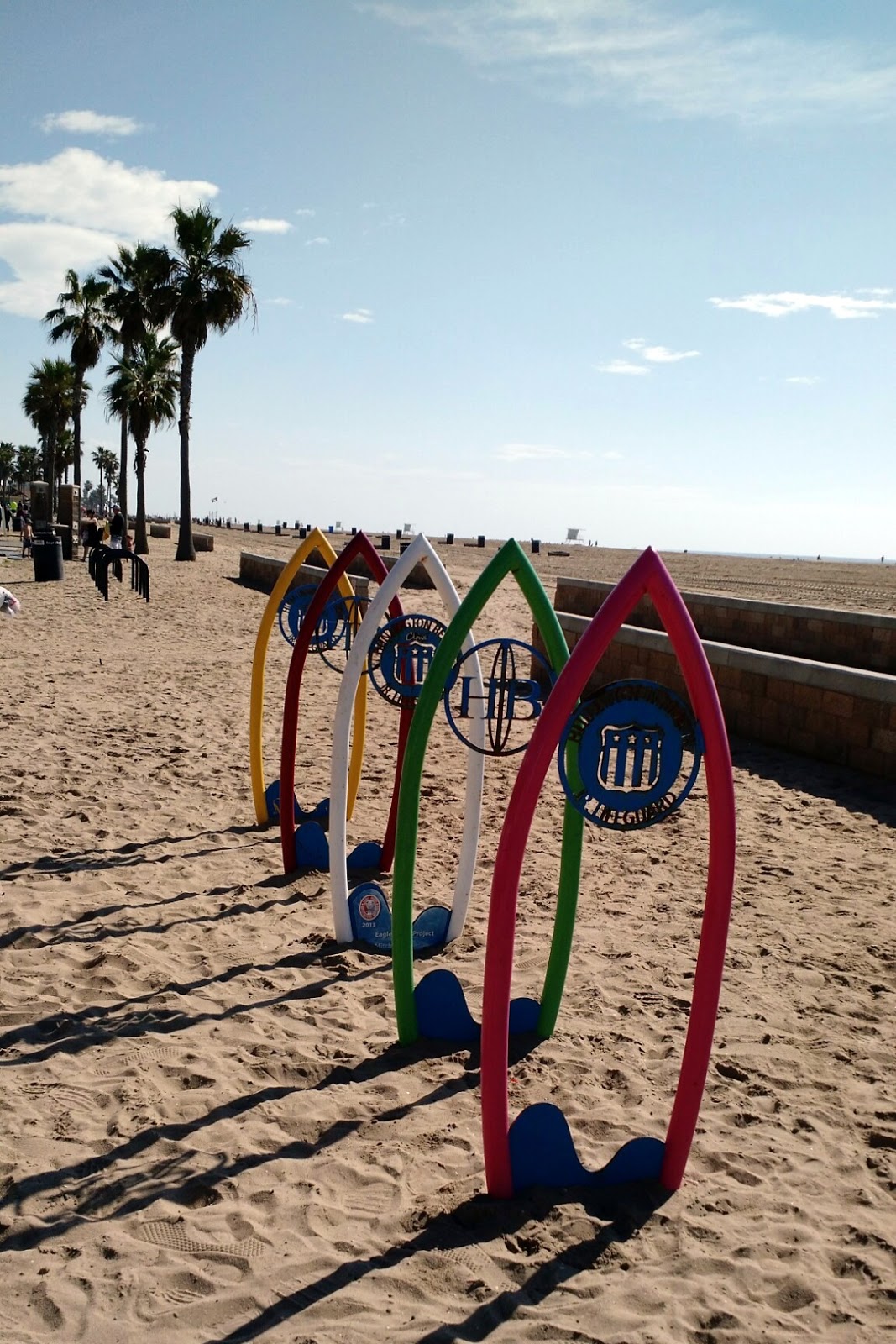 After finishing, we headed to the expo tent to get the 'California Dreamin' medal, an award for running both an SF Marathon event and Surf City. It's a fun bottle opener. Next we went to the beer garden area where we were surprised to find that each participant got 2 beers. They even had a selection: some super light beers like Bud Select and a few Kona Brewing beers. I enjoyed the Big Wave Golden Ale and Fire Rock Pale Ale, both from Kona Brewing.

The Support. The water stations were about every 1.5 to 2 miles and well-stocked with volunteers, water, and Vitalyte. There were plenty of portapotties along the course, and I didn't even wait in line when I needed to go. That said, I had trouble finding the portapotties near the start because they were farther away from the corrals (also, why I had to stop during the race.) They handed out Gu Chomps around mile 7.5. There were not many spectators along the route, but the scenery made up for it.

The Finish Line. As mentioned above, the finish line had a great beer tent. They also left the expo tent up including the Nuun booth, Fig Bars table, and tables to get the special double medals. This was a convenient way to organize people after the race. The finish line also had a band playing in the beer tent area.

Swag. The shirts are cute and came in men's or women's specific cuts. The women's are v-neck, which I like. The medals are little surfboards and very high quality, plus the extra 'California Dreamin' medal is awesome. Last, they handed out packets in race specific reusable shopping bags. 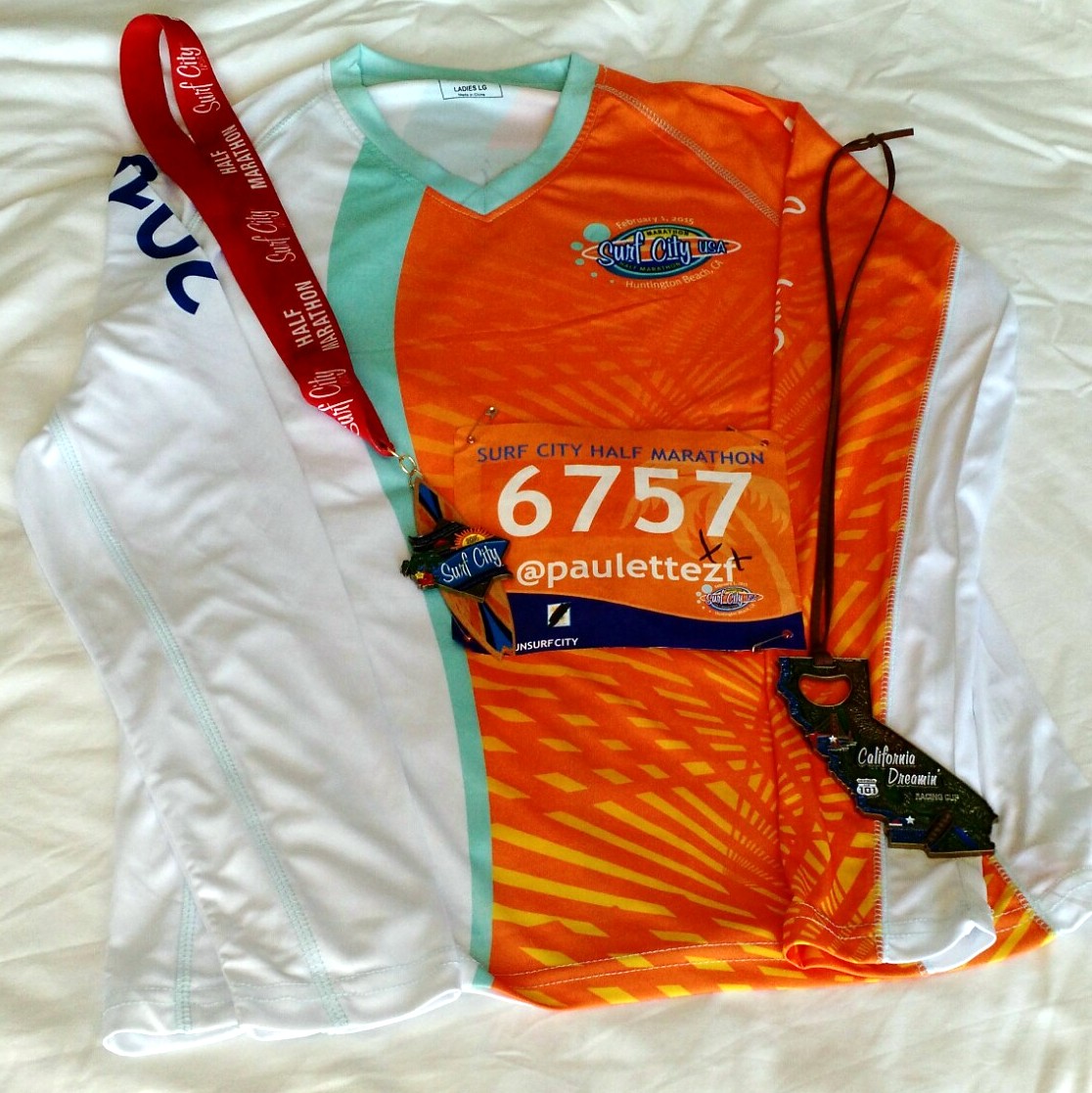 And that's it! Overall, it was a very fun weekend in a beach town and the race events were super well-organized. I'd recommend the event and think it could be a great PR course if you run well in warmer temperatures.