On October 10, I ran the Skyline to the Sea 50K as my first ultramarathon. Almost a week later, it still feels a bit surreal - but I can't wait to do it again!

Kevin was nice enough to ferry me to the start line and to pick me up at the finish so I could avoid the long bus ride. It's a point to point course, so if you don't have someone drop you by the start you have to take a bus from the finish. Considering we live very close to the start, this made my morning way easier. Shannon also rode with us to the start, and when we arrived we found a bunch of people we knew to hang out with. 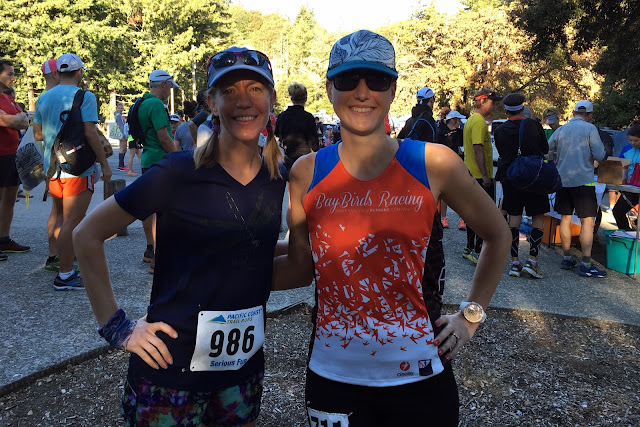 Shannon and I at the start.

I was pretty nervous that morning so being with friends was very helpful. Some had run 50Ks before and some were doing their first like me. Before I knew it, the race director was giving instructions and we were heading to the trailhead. 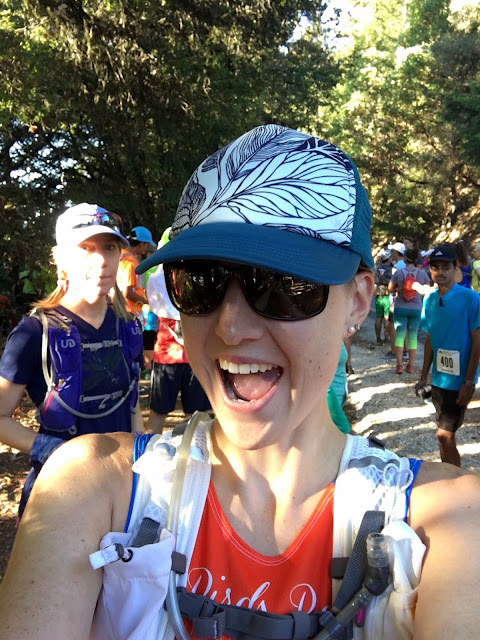 My 'I'm about to run my first ultra' face. 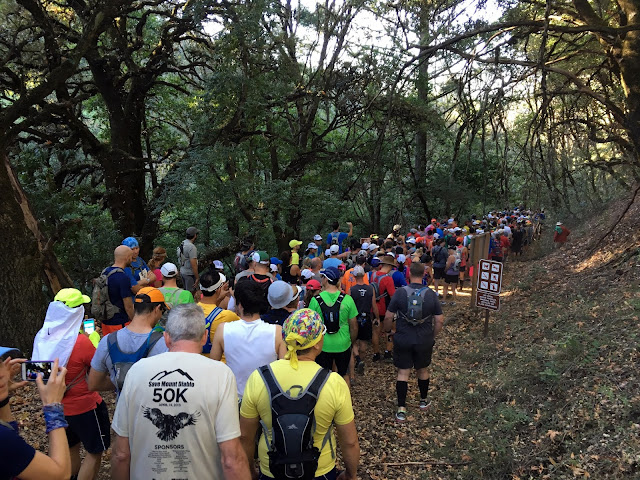 Runners in the start area.

The race director officially sent us on our way, and initially it was very crowded and hard to run at all. Then again, what do you expect when you have to filter a couple hundred people into a single track trailhead? It took a mile or so to really start spreading out, but as it did I was able to pass people more easily and to find a good pace.

My excitement and enjoyment of the people around me lead to a faster than planned start, which Jen had warned me about from her experience and Cathryn had said not to 'go out like Seabiscuit.' Thanks for the advice ladies, it helped me settle down! I continued through the first aid station at Waterman Gap without taking anything; I had 2 liters of lemon lime Skratch in my pack and had been eating  2 chews every 30 minutes so I was doing well.

After 7 or 8 miles, I decided to drop back from the people I'd been chatting with and said bye to Shannon; I needed to focus on my own pace and knew I wasn't doing that when I was with others (despite the fact I liked talking to them.)

One of our climbs topped out at the China Grade aid station, where I was pumped to have some Coke. The temperatures were heating up into the 80s so I also dug my bandana out of my pack, wet it with cold water, and tied it around my neck. Best decision ever.

After that aid station, we began what I consider to be hard downhill. There was no more smooth dirt; it was rocky, root-y terrain that could send you face first into the dirt if you weren't careful. I knew this going in and I'd run it before, but I found myself being excessively cautious and holding back big time that day. My paces were way slower than I thought I should be able to handle based on training and the trail marathon, but I tried not to let it stress me out. I told myself it was better to finish the 50K happy than to end up injuring myself along the way.

Around mile 15, I arrived at the Gazos Creek aid station (more Coke, thanks) and it was time to tackle the Gazos Loop. This is the loop that makes the distance 50K instead of a marathon, and it has the reputation of being very hard. I'd never been on it and had no idea what to expect, but I climb a lot so I felt ok about it. The loop starts with a long uphill climb, which frankly I was ecstatic about after all of the challenging downhill. The climb wasn't bad and the views and terrain near the top were gorgeous. Before I knew it I was back at the Gazos Creek aid station. This time I filled my pack and also put ice in my bandana.

I apparently left Gazos Creek in a daze (or perhaps focused on messing with my bandana), because I missed a sharp left turn and ended up off course. I'm not sure what snapped me out of it, but thank goodness after 10 minutes or so I realized I didn't see pink ribbons anymore. I asked a hiker if he saw other runners and he said no. Well, crap. I turned around and started back down the trail I'd climbed but my head was a mess with thoughts. OMG I'm ruining my first 50K...I don't even know if I can run 50K, let alone farther than 50K...I'm already taking way longer than I wanted and now I'm lost...I bet a ton of people just passed me...etc.

Of course there was nothing I could do but go back to the correct trail. I couldn't get back time, and I wasn't going to give up because I ran an extra mile or two. Then I remembered Magda coming into Last Chance aid at Western States and saying she had been off trail for a few miles. She wasn't even freaking out, she was asking us to radio the staff to make sure it was marked better for others behind her. If Magda can be that calm when getting lost on a 100 miler (not to mention come back and still win), I could deal with an extra 20 minutes on a 50K. Mental issue solved.

I found the turn I'd missed, paused about 30 seconds until more runners came by to be sure I didn't screw it up again, and continued on my way. This portion of the course was the most challenging for me, partly because it went back to the technical downhill and partly because we had over 8 miles until the next aid station around mile 29. Even though I had what I needed, I missed the comfort of knowing an aid station was nearby.

At least I had run this part of the trail recently and was looking forward to the pretty Redwoods and to Berry Creek Falls along the way. The trail is absolutely beautiful and is one of the reasons I chose this 50K in the first place. I started to come up on other runners again and had people to talk to, plus there were many hikers and backpackers out on this section of trail now that it was afternoon.

The trail gets wider and has easier footing once you get through the creek and falls section, and I admit my body was happy to have less to trip over. I LOVE running single track, but this trail gave me a big challenge; I clearly need to practice running on more technical terrain. A lot of this downhill section was as slow as if I were doing a big climb. The most frustrating part is that I knew my body had more to speed and energy to give, but I couldn't get my brain to let it happen.

Also around this time in the race we had passed the 'marathon' distance; I became very smiley and thrilled that I really WAS going to finish my first 50K. Finally!

The tree cover and getting off course had both messed with my watch mileage, so I came across the Twin Redwoods aid station before I expected to see it. Yay, more Coke! I refilled water because I was empty and even though I only had 3 miles or less, it was hot. I also grabbed a piece of boiled potato.

We went back onto single track trail and had one more climb, but soon I started to hear people cheering at the finish area. The trail descended and came out into an open area for the finish. That was it, I was done! My finish time was 7:23:23. 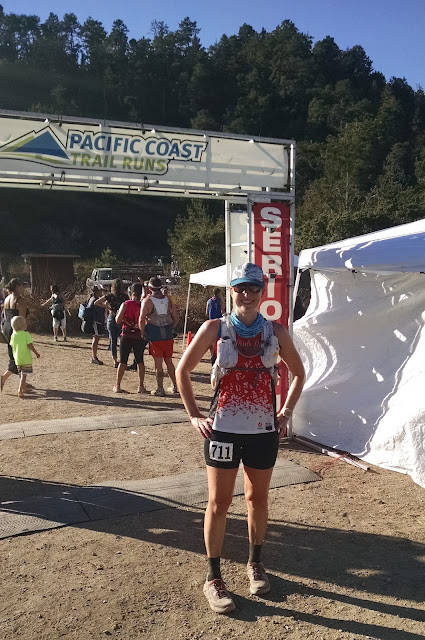 Many friends were still around the finish area and we hung out for a little bit. I felt super excited about finishing and even more excited that my body felt good. When can I do it again? 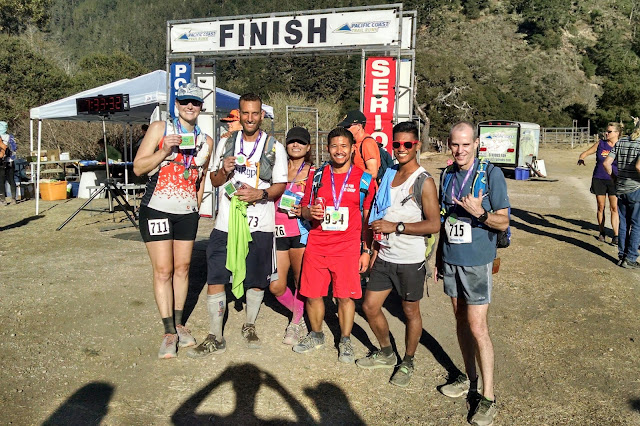 PCTR does an awesome job with the race swag too. For Skyline to the Sea, I received a medal, shirt, 'First Ultra' coaster, and a buff-style gaiter/headband. 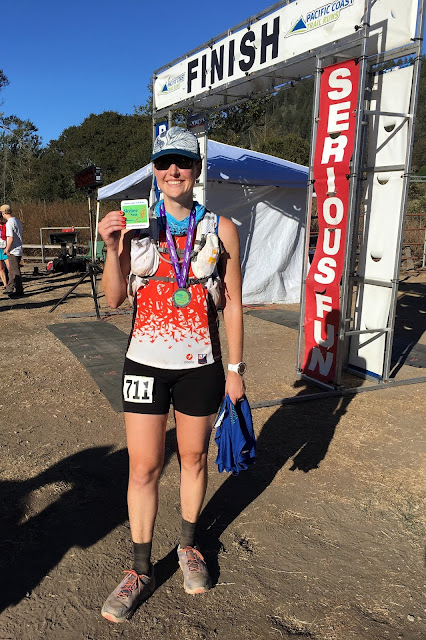 Showing off the coaster. 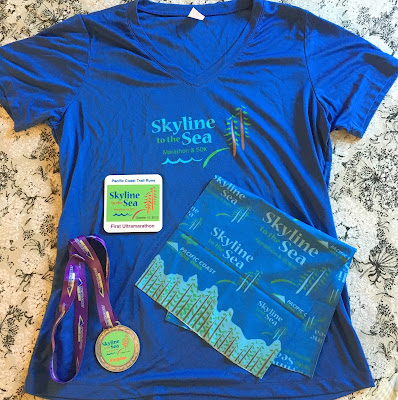 The course. My advice on this course is: don't underestimate it. Yes, it's a net downhill and less overall climbing than many, but it felt way more challenging than I expected. Based on my paces in the Headlands Marathon, I thought I could finish this 50K much faster and that wasn't the case at all. The difference in terrain and my lack of practice on technical downhill really got me.

That said, there are so many wonderful things about the trail that would make me want to run the event again. It's a beautiful course lined with redwoods, it has a fantastic tree canopy that kept the temperatures cooler, and it's pretty much all single track. I'll have to practice my downhill skills and try it again someday!

The support. I've been very happy with the support provided by PCTR, and the level of support has been consistent in all 3 of the events I've done so far. Aid stations are well stocked with food options, electrolyte drinks, coke and ginger ale, and water. They had ice at Gazos Creek and Twin Redwoods, which is when we really needed it because of heat. Volunteers were super helpful and seemed excited to be out there. They tracked runners through every aid station and recorded numbers to make sure everyone was accounted for and safe.

PCTR also has burgers and food at the finish area, which is awesome! This particular time we headed out to eat, but in the past I've enjoyed the burgers very much.

That's all for now. Tell me, what 50K should I do next? What's on your schedule?
Labels: 50K goals race report Races trail running ultrarunning