A Goal or Not a Goal

This is supposed to be the post where I excitedly share my next new and exciting race goal. I've thought about starting this post many times, but I keep getting stuck. Why? Because at this moment in time, I'm not excited about the goal I've set for myself: attempting a marathon PR at The SF Marathon on July 31. I love the event and the course, and I'm not necessarily saying I don't want to run it at all. I'm just not sure if I want to make it a PR goal and focus on it for the next 3.5 months. 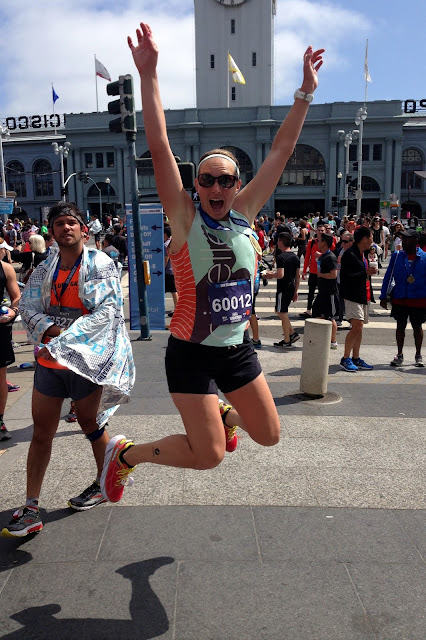 The marathon finish excitement that caused the early SFM race sign up.

Now this might have been an easy issue to solve - don't do it, right? - except that I went one step farther and was planning to work with a running coach for the first time on this goal. At some point in the last few months, I started to want to get faster mostly because I love social running. I want to be able to keep up with people and talk to them, not be the girl always dragging behind just to arrive at the regroup spot as everyone leaves again.

Anyway, the desire to be faster coupled with the fact that I'd already been talked into signing up for SFM resulted in me designating it as my goal race. I was thinking a road race goal would be 'good for me' and I 'should' want to PR a marathon. I interviewed a couple of coaches, decided to work with Sarah, and talked to her about my races for this year. She set me up with a plan, starting with recovery from the 50K and then transitioning into SFM training. She's awesome, the plan looks solid, and she even has a decent number of trail runs included to keep me happy. Even so, now I sit here with Training Peaks in front of me...feeling frustrated.

I wish I could place the true source of my frustration. Am I nervous because I've never worked with a coach? A little. Am I scared of the workout and race paces? Maybe. Am I still on a trail running 50K race high that will pass? I'm likely on one, but it may never pass...

All in all, I think it comes down to this one question that plays over and over in my head: If I run SFM, am I wasting one of my long races for the year when I could pick another trail event?

Plenty of awesome runners, especially at SFRC, run both road and trail races. I'm sure it's beneficial to train both, and Sarah agrees. The difference I see is that they run A LOT of long distance events each year, and I only get to do say, 3 or 4 if I'm lucky.

So that's where I am with my next goal right now. I'm going to work on the current SFM plan for the next month or so, see how I'm feeling, and then evaluate. I was finally open with Sarah (I was initially afraid to admit it because she'd already done the work on my SFM plan) about my goal indecisiveness and she's willing to help me change it up if needed.