We traveled to Seattle for the Tenacious Ten last weekend, which was the second year for this Oiselle sponsored 10M and 10K. I missed it last year because of Canyons 50K, and I made sure to plan ahead to go in 2018. Beyond the race itself, I wanted to join the many friends who would be reuniting and hanging out!

Moving my 50 miler to the weekend before the Ten10 definitely concerned me, but I figured I'd have fun visiting Seattle even if I wasn't able to run. Luckily, I felt pretty good after the 50M - way better than expected - and was able to fun run (not race) the 10K.

We arrived in Seattle around noon on Friday and went back to our friends' house to chill for a while. In the late afternoon, we headed to packet pick up and shopped at the Oiselle store. I hadn't been to the store since it first opened in August 2015 and I was really excited to see and try on things in person.


After spending too long at the store, we moved on to meet a bunch of friends at Optimism Brewery. We reunited with many local friends as well as people who traveled to Seattle for the weekend like we did. I was stoked to finally meet a few people in real life who I feel like I already know via social media.


The race was the following morning; I didn't sleep well at all and woke up feeling nauseous. What the heck lately, body? I really thought I might not be able to run for the first 30 minutes or so of being awake and I was SO sad about the idea of missing the fun. After sipping on orange juice and being awake longer my body came around, so it was likely a blood sugar issue. My eating and hydration was off from traveling so perhaps I shouldn't have been surprised.

We arrived near the race start in Gasworks Park a little later than we should have, and we had trouble finding parking. Aside from a small parking lot it's all neighborhood street parking; this is something to prepare for if you are running this one. We finally found a spot and walked very quickly to the start, hit the portapotties (thank goodness for lots of them and quick lines), and got in the start corral. We had ~15 minutes when we got the the park but it felt rushed.


Soon we were off and running! The 10K did a loop around the lake, and the 10M did that loop plus and out-and-back section before the Fremont Bridge. The weather was perfectly cool and I truly enjoyed the course. It had some water views and small up/down grades to keep it interesting, and I loved seeing tons of people I knew along the way. I don't run road races very much anymore and I had forgotten how fun the atmosphere can be! There were also some fun cheer stations from companies like Ragnar and Nuun.


After we split from the 10M runners, we went up a small hill and crossed the Fremont Drawbridge. I love bridges! Right after that I noticed the Google office on my left and got weirdly excited to see it along the way.


Next came a downhill toward the park entrance and a gravel path into the finish. The whole thing went by so quickly (perhaps this is because I did 50 miles the previous weekend...?) I started wondering why I usually do such long races when I can run 10K and then go to brunch. At the finish line, they gave us fantastic donuts and had many other vendors there with samples.

I cheered at the finish for the rest of the 10K and 10M runners, watched the awards, and cheered for the kids race that followed. The kids were adorable - Colt Goucher started in the back and took the win. I guess he's a natural like his parents. Kara also won the 10M that day, so it was a double Goucher win!

Post-race involved brunch at Brave Horse Tavern (biscuit eggs benedict, wow!) followed by chill time at Jess and Gavan's house. I took the most wonderful nap; I have to say, I'm enjoying this whole training down time and recovery thing. It's been a long time coming.

The evening activity was the Bright Birds dance party hosted by Oiselle, which was held in a private loft type space. I loved the set up because it provided plenty of dance room but also room to chat and sit when preferred. Oiselle is known for hosting great parties and this one lived up to the hype!

We were only in Seattle part of the day on Sunday, which we spent having brunch and visiting a couple of breweries. Relaxing in the sun at Elysian was a big highlight of the day, their patio was great and they had a good hazy IPA. Unfortunately, we had to head back to the airport around 3 pm and the trip was over.

Last but not least, I leave you with a race swag photo because it was the best! We received a hat, special edition Flyte tank, and cowbell medal. Plus, the photos were free and we got a card with a discount to the Oiselle store. That's my kind of swag! 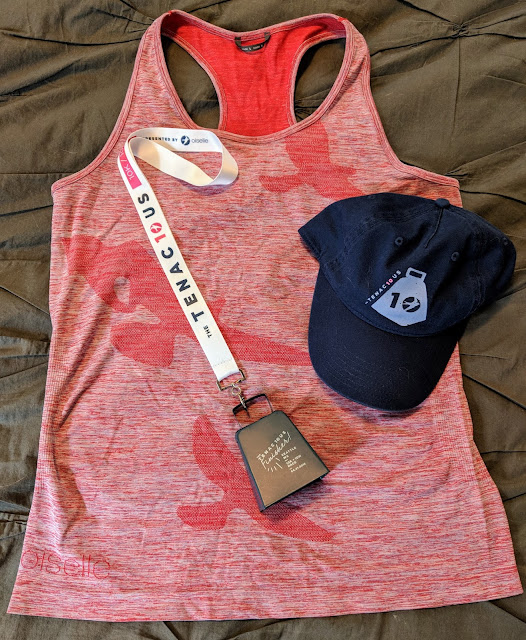