For the past few years I've had my eye on the Western States training runs, and finally this year the dates aligned. Western States holds a 3-day training weekend over Memorial Day each year to help runners prepare for the race, covering 70 miles of the course. The runs are open to anyone who wants to come experience the trails, even people who are not (or may never) run the race itself. People who have read my past blog posts likely know that I'm obsessed with the Western States trail, so it's not surprising that I wanted to participate!

Kevin and I did the Saturday run together, which is ~32 miles beginning at Robinson Flat and ending at Foresthill. Even though it's not a timed race, it's a very organized training run with buses to the start (it's a point-to-point), four aid stations, and bracelets to track runner safety. We arrived at Foresthill around 6:30 am for the 7 am bus departure, hit the porta-potties, chatted with other runners, and found some Bay Area friends. There was a debriefing about the route and some fun trivia with real prizes, then we headed to the bus.

We got on the first bus we came to because it had empty front seats and I'm always worried about my motion sickness; however, this was the last bus to leave and we arrived at Robinson after people had already started running. By the time we used the restroom, we were almost the very last runners to start the run with maybe 5 people behind us. This was not an issue logistically, but it meant that we started after the bulk of runners and, except for maybe the dozen people we passed, saw hardly anyone on the trail all day! If I had it to do again, I'd get on an earlier bus so that we could feel like we were part of the group.


The run started as wide fire road through the trees and then started to wind downhill with some great views. I had no idea what to expect on that part of the trail so it was all a new experience. We continued through forested areas and fire scars, cruising comfortably on the mostly downhill terrain. We dropped into Dusty Corners aid station at mile 7.7, where Kevin proceeded to eat all the snacks until I made him leave. Arriving at Dusty Corners was especially cool because this aid station was my first ever WS memory when we crewed for Matt in 2014. I remember watching runner after runner come down the hill into Dusty, always wondering what came earlier.

The next section of trail from is familiar to me because I have run it multiple times when volunteering at Last Chance for the race, and I couldn't wait for Kevin to experience it too. The trail turns into single track and rolls through trees along the side of the canyon. About 2 miles before Last Chance, you come to Pucker Point - an amazing overlook of the American River. The day of this run was unusually cold and foggy, often this is the time for heat training before the race. When it's clear, you can see all the way into and across the canyon from Pucker Point. Either way, I absolutely love this part of the trail!

Last Chance wasn't an aid station for this training run, but I still enjoyed visiting it and thinking about the memories I have there. It's an interesting place with its old house, burned out car, and abandoned mining equipment nearby, and I like to think about how much history a place like this holds. With regards to the Western States trail, Last Chance is considered the jumping off point into the canyons. We continued on our way to my favorite trail sign, the farthest I'd been on this side of the canyon until that day, and then excitedly started our 2000 foot drop into Deadwood Canyon.


The trail narrows and descends pretty quickly, and I stayed focused on my footing to avoid falling hard. I'm likely too cautious when I'm going downhill - better safe than sorry? That's something I'd like to work on. We descended for a long time and I eagerly awaited our arrival at Swinging Bridge, another landmark. I would have visited the bridge during Canyons 50K; however, a mudslide on the trail had caused us to turn back just enough before the bridge to see it but not experience it. We crossed the smaller bridge, went by a beautiful waterfall, and finally arrived at Swinging Bridge. Both the bridge and the river were looking stellar that day. 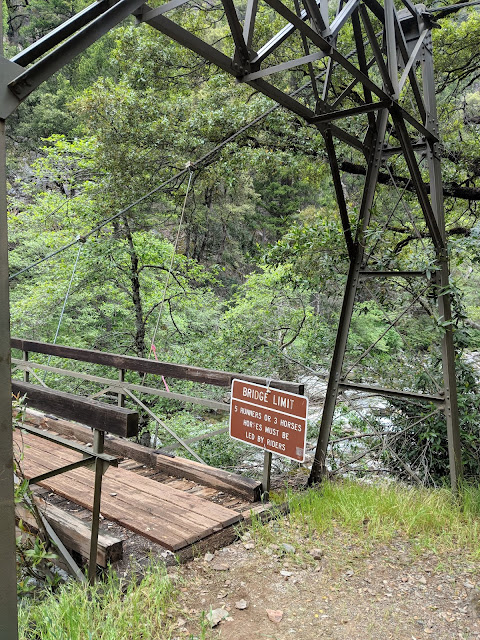 And before we move on, can we talk about the sign in the last photo? How can 5 runners be equal to 3 horses, who are also lead by riders? Removing 3 riders/3 runners, that's like saying that 2 runners are equal to 3 horses. I really don't get it, but I'm entertained. Perhaps they put this here to give people something to debate during the climb out of the canyon.

After the highlight of Swinging Bridge, we started the hard one: the climb to Devil's Thumb. I had forgotten how steep this section of trail is, and Kevin immediately gave me a WTH comment on the steepness. I 'consoled' him by letting him know it's like that the whole way up. For real, the trail climbs 1500 feet in ~1.5 miles, and it's no joke. Now consider doing this in the heat of June (we are talking 100s in the canyons) at Western States, when you are 45 miles into 100. Yeah, I can't imagine that either!

On that particular Saturday though, we climbed strong and did quite well. We lucked out with the cooler temperatures and my climbing legs are still strong from a great 50 miler training cycle. The scenery is very interesting and eerily beautiful, forest nestled into fire scars and steep drop offs to the side of the trail.

During the race, the next aid station is right at the top of the climb but for the training run, we had another mile or so to the aid station at the Pump, mile 18.5. Luckily, that part of the trail is chill flat or downhill and it was good recovery from the climb. After a Tailwind refill and some Cheez Its, we moved along toward our next descent into El Dorado Canyon.

I've done this descent and climb before during Canyons 50K, and it was just like I remembered. The downhill is a nice, more gradual descent of 2600 feet, where you cross a bridge and start up the other side. The climb is 1800 feet and also more gradual, but it feels like it will never end and it was soul sucking both times I've experienced it. Don't get me wrong, I love the trail and it's beautiful, but this climb falls straight into the type-2 fun category.

Eventually, we got ourselves out of El Dorado Canyon and into the Michigan Bluff aid station, mile 25.4. We were feeling defeated at this point, but an incredibly enthusiastic aid station volunteer turned that right around. Also, they had Cheez Its and that'll improve any situation.

From Michigan Bluff, you run along paved road for a short time and then hit tree-lined dirt road for a couple of miles. The trail then goes back to single track and descends into the final canyon of the day, Volcano Canyon. I love the terrain and scenery on this part of the trail, and crossing Volcano Creek at the bottom is an extra treat. Last time I crossed it was thigh high, this time it only reached my ankles.


At that point ~3 miles remained between us and Foresthill, and we gave it what we had to climb out of that last small canyon. We were tired and to be honest, undertrained, but we didn't let that spoil our fun! We ran it into Foresthill, high-fived our successful day, and promptly devoured the wonderful grilled cheese sandwiches that awaited us at the finish.

I definitely want to return in the future and hope to do multiple days the next time. Experiencing the course as a point-to-point run just like the race itself was fantastic, and I'm thankful to the race director for putting together these great training runs.