Ever since Skyline to the Sea 50K, I've been toying with the idea of what 50K will be next. I knew from the moment I finished there would be another, but I didn't know how soon. Despite the fact that my brain wanted to go again immediately, my body wasn't ready and I've now come to terms with that. I received a lot of helpful and understanding feedback from my post about the body saying no, which I seriously appreciate. The responses helped me work through the mind games, and I'm now in a much better mental place! I can't thank you enough.

One suggestion in particular stuck out to me: racing less could let the body enjoy running more because it provides a mental break from training. I haven't been on a training schedule since October 10, but I wasn't thinking of it as a mental break and instead had been beating myself up about not having a schedule or mileage plan. Having someone knowledgeable relate and tell me that IT'S OK to have no plan took a weight off my shoulders. Perhaps this should be obvious, but in reality I wasn't letting myself believe it until I heard it from other experienced runners.

As for the less races part, I completely failed at the not-signing-up phase of this idea before getting the advice. This means that even though I'll be doing some Brazen races for the end of the year, I'm keeping a 'run for fun' mindset and will not 'race' anything that I'm running. As I'm not a super competitive person and there is no specific training needed for the distances, I know I really can 'fun run' during the events and truly enjoy the trail locations.

That brings me to my next two goals, and I'm pumped about both of them. First, I am planning to run the Brazen Ultra Half Series. To complete the series, runners need to do (at least) 5 of 13 trail half marathons plus the series finale Rocky Ridge, the hardest of the Brazen Races. That's 6 trail half marathons over the course of a year, running from October to October. I'll kick this off with Summit Rock on December 12, then follow it closely with the New Year's Eve (actually December 27) and New Year's Day events. The two New Year's events are the same course run clockwise one day and counter-clockwise the next. In a year where New Year's Eve is on the weekend these would be back to back, but sadly that's not the case this year.

For the two other races, I'm hoping to get a spot in Double Dipsea and will likely go for revenge on the Wildcat course that schooled me a couple of years ago. There are quite a few other options too, so we'll see how it all shakes out. I love Brazen and I'm excited to do more of their events this year.

The second goal is my next 50K; I'm officially signed up for Woodside Crossover on April 9. I absolutely love running in Huddart Park and the surrounding area, and I've had my eye on the Woodside courses for a long time. Registration opened within the last few days and despite me trying to be wishy-washy about signing up, in reality I've had a training schedule for this race on my calendar for a month. I made the decision official last night, now it's done! 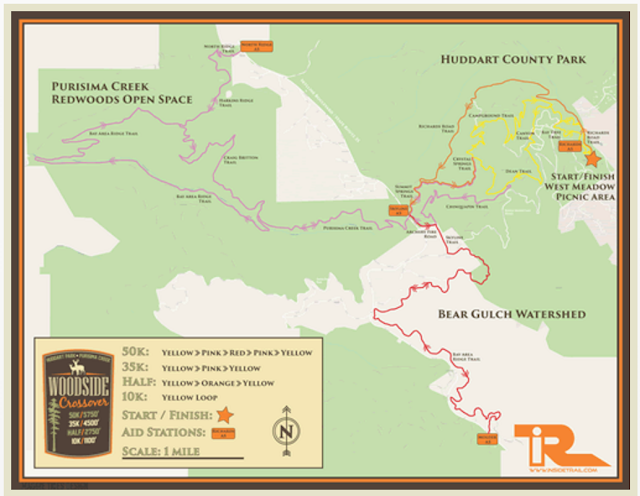 I'm looking forward to the end of year trail running, plus some skiing before I have to get completely serious about the 50K again. I'll start ramping distance up above the half marathon in early February to prep for Woodside Crossover.

I'm feeling good about these two goal decisions and plan to keep my run schedule chill for the next few weeks to really recover from a big year. Cheers!
Labels: 50K Brazen Racing half marathon Races trail running ultrarunning