Today wasn't my PR day, but that's ok. I went in feeling confident, thinking it should be a no problem PR after all of the track work I've been doing. I started out faster than I normally would around a 9:25 pace, thinking I could hold close or drop off only slightly because I'm usually a negative-split half marathoner. Oops, wrong.

I'm not sure if I went out too fast (target average pace was 9:40) or if it was 70 degree temps, but my old friend the side cramp came out around mile 2.5 and hasn't let me go yet. And yes, I mean I still have it as I write this post at 9 pm. I'm getting much better at running with the cramp, which is good I think, but at some point it just gets to me and really hurts. It hurts more when going downhill, so even the little downhill inclines near the end of the half were torture. I held my target PR pace until about mile 8, but after that I began to slip quickly. By mile 11 I wasn't sure I could manage to run to 13, and I ended up with some walk/run for the last couple of miles. I crossed the finish at 2:14:24, about 7 minutes slower than my current PR.

I really wish I could get to the bottom of the cramping issue. My pattern in the last year is no cramp = PR or close, cramp = 7+ minutes slower than PR. Talk about frustrating. Even though the side cramp played a role in the slow down, I also learned today that longer tempo runs are a must. I've been doing the track interval work, but that isn't yet getting me to the distances I need. I likely also need more mental stamina to hold onto faster paces, although at least I'm good at pushing (albeit very slowly) through pain.

On the bright side, I was able to see quite a few friends at the race and the weather was gorgeous. I really enjoy the course, especially the Crucible fire arch and this iron horse that breathes fire. There are many cheer stations with music, a highlight being the Oakland Raiders group who dress up and get super excited. Aside from the not so ideal race performance, it was a fun day. 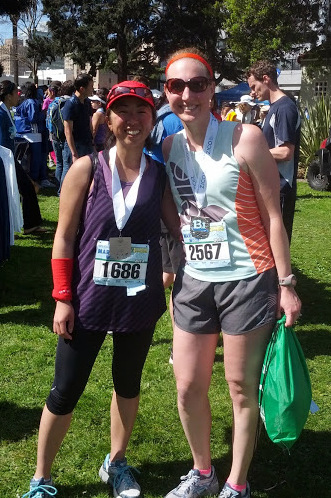 Post-race with Natalie, so much fun to see her this weekend! 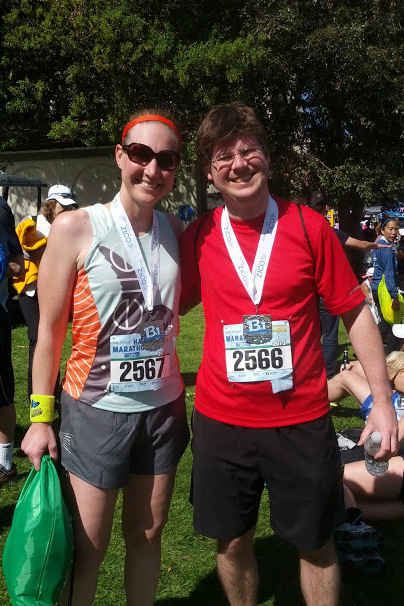 The race overall is a great event. I especially like the later 9:15 am start time, which enables everyone to take BART to a block away from the start line. Having no parking or driving hassle is amazing. The staging area is in Snow Park, which has plenty of space for the race festivities and for people to lounge on the grass after it's over. The course runs through downtown Oakland and people are pretty into it; there are lots of people out cheering along the way. At the end, they give you not one but TWO two beer tickets, which are redeemed for cans of Coors Light. Not my fave beer, but hey it's a nice gesture and beer in general tastes good after running. 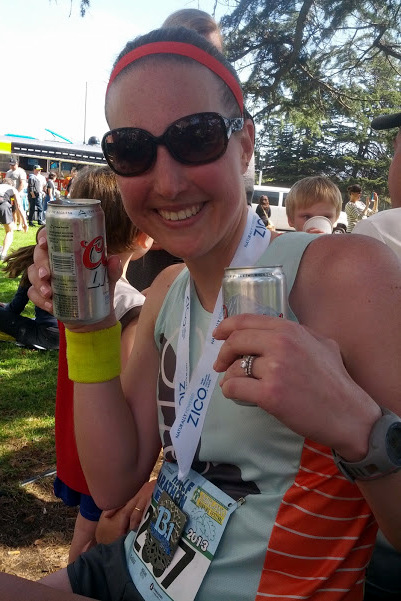 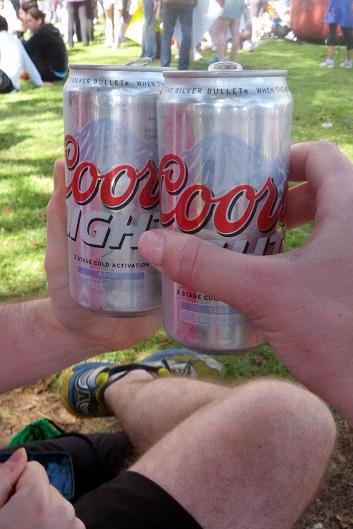 And now the race details.

The Expo. The Oakland Running Festival expo is medium-size, and it's a fun one to walk around to see vendors and other local races. This year they had a booth for Hoka One One shoes, and I couldn't resist trying them on. More on that in a later post! We didn't have any lines for picking up race goods, and it wasn't too crowded when we went around 1 pm. I really like the shirt design this year, although I wasn't a fan of last year's design. Shirts were long sleeve and men/women specific. 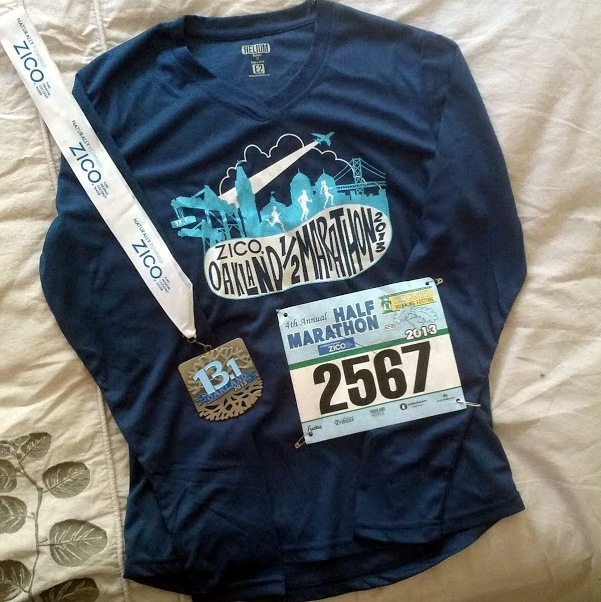 The Course. This one is basically flat, with perhaps a few easy inclines or declines for an underpass and around Lake Merritt. Really though, I don't think these are considered real 'hills.' I found it to be a pretty easy course in the world of half marathons last year, and I was thankful for that this year when I was hurting. As mentioned above, I like the people out cheering and the little groups with entertainment.

The Support. The volunteers did a great job! Gear check was a little confusing because the bib number signs were off, but otherwise nothing to be critical about. I never had to wait for water at aid stations, and they had plenty of water and gatorade. There was one Gu station on the half course too. There were porta-potties with each aid station, and I'd say the aid stations were about 2-3 miles apart. The Police were out to control traffic and were doing a great job at dealing with annoyed car drivers stopped at the intersections. I wouldn't want that job!

The Finish Line. After crossing the finish line, there were volunteers handing out heat sheets (not needed today!) and medals. I love that she put the medal around my neck instead of just handing it to me. Next they were handing out bottled water and gave me two, yay. I grabbed a cup of Gatorade and headed through the chute. I saw them handing out fruit cups and my husband said there were Cheetos, bananas, apples, pretzels, and granola bars, but somehow I didn't see any of those. There was also a Zico coconut water station of course, they were the sponsor. The start and finish are both in Snow Park, so we were back to the nice grassy area at that point. The park had the beer tent, merchandise, and food trucks (food trucks needed money.) 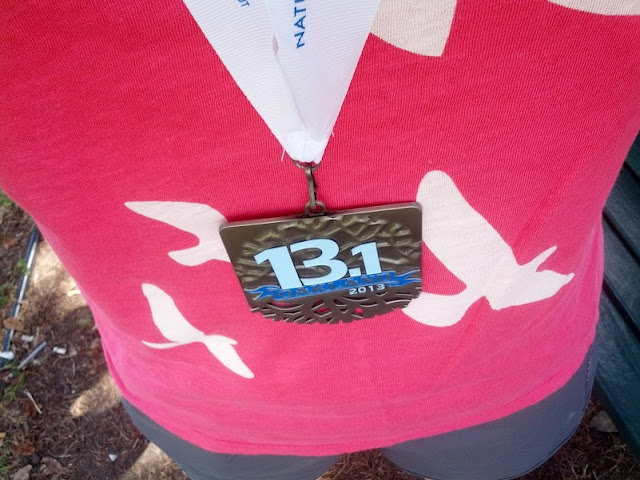 The race ended, we grabbed some pizza at Zachary's with Natalie, and then headed back for our BART ride home. Again, I love the ability to take public transportation to the race. 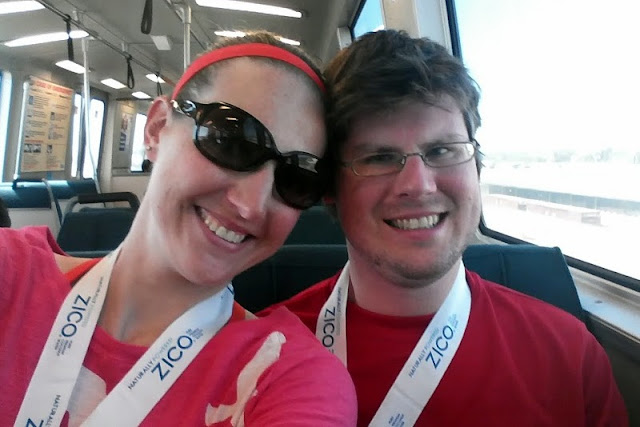 Love it so much I had to take a photo. Not really, I just got bored.